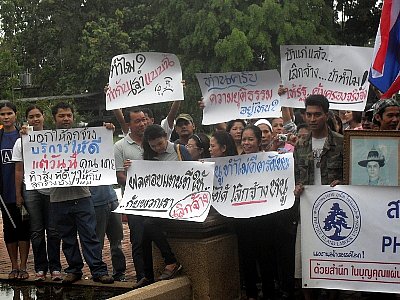 The petition was the latest move by the union following an impromptu strike and subsequent sacking of more than 400 staff at the Evason Phuket & Bon Island resort on Tuesday.

Union vice president Warin Sungkong announced the intention to seek the governor’s help after an attempt to negotiate a settlement was aborted on Wednesday.

On that occasion, the resort owner declined to attend a meeting with the union, mediated by the Phuket Provincial Labor Protection and Welfare Office.

Mr Warin acknowledged that the hotel owner wanted to postpone the meeting until June 12, but said it was wrong to suddenly change his mind after having agreed to the meeting on Wednesday.

Yesterday, it was the turn of union president Santat Sertprasit with more than 100 union members to take the fight to Governor Tri.

The delegation was received by Phuket Vice Governor Sommai Prijasilpa, who listened to their demand for a better severance package.

Their former employer had already agreed to pay compensation in accordance with Thai law, plus a one-month bonus. But the union claims this will not be enough for most of the employees, who have worked at the hotel for more than 15 years.

Most of the people losing their jobs are the family bread-winners, aged 40 to 50 years old, the union claimed.

V/Gov Sommai acknowledged the union’s demands and said she would report the matter to Gov Tri and get back to the union with conclusions.

“All former employees of Evason Phuket & Bon Island resort should register at the Employment Office. If we have vacant positions available, we will contact you immediately.

“Any of those who have not yet registered with the Employment Office, please do so within 30 days from May 24,” he said.

Kittipong Laonipon of the Phuket Provincial Office of Labor Protection and Welfare, told the Phuket Gazette today that he has organized a meeting with a representative from the resort to be held at the his office at 2pm on May 29.

However, he declined to identify precisely who he will be meeting with.

Repeated attempts by the Gazette to contact management at the resort have been unsuccessful.

The resort closed Tuesday night following the impromptu strike by the staff.