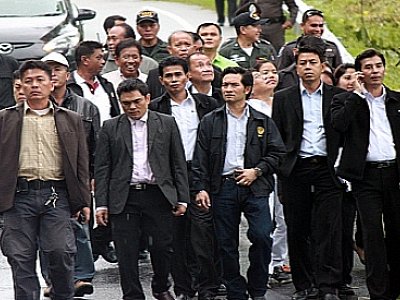 PHUKET: Government Spokesman Prompong Nopparit today announced that he believes foreigners were involved in the illegal acquisition of protected forest land on the headland south of Patong Beach, on Phuket’s west coast.

Leading an entourage of about 20 people, Mr Prompong this morning inspected the 20-rai plot of land in question, located near Freedom Beach.

Mr Sithichai was unavailable to answer questions today, but has already voiced his support for the series of investigations into illegal Phuket land titles.

During questioning, Mr Somchai explained that ownership of the land had changed hands many times over the years.

However, some critical information was not recorded, Mr Prompong discovered.

In response, all Mr Somchai could reply was, “I was not even working in Phuket at the time.”

Noting the complications, Mr Prompong said all the evidence collected during the investigation by the Office of Public Sector Anti-Corruption Commission (PACC) will be taken back to Bangkok for further examination.

Mr Prompong told the press earlier today that the land in question had been transferred into the ownership of a private company that had foreign shareholders.

“We will investigate further into what percentage of the company the foreigners own,” he said.

“A Chanote title was issued for the land, but the land was not even covered by a SorKor 1 [land document], and the land is believed to be inside a protected forest area.

“For both reasons, the land cannot be issued a valid land title deed,” Mr Dusadee said.

He explained that his suspicions were aroused when his investigation revealed that the same Chanote title number for the land now had been issued on two other occasions for the same land: Chanote Number: 89530.

“PACC officers discovered that the land survey map sheet number was registered on January 18, 1990, and a Chanote title was issued three times thereafter. This is illegal since a Chanote title can be issued only once,” he said.

Another factor clouding the issue is the matter of the land status: protected or not.

“Documents produced by the Phuket Provincial Land Office [PPLO] surveyor, who previously inspected the land, state that the land is in a protected forest area.

“However, officers from the Phuket Provincial Forestry Office claim to have reported to the PPLO that the area in question is not in a protected forest,” he said.

PACC officers also believe that the area was once a protected cattle field and was first registered in 1938. It was only in 1991 that the Chanote title was canceled since the area was included in the Nakkerd Hills protected forest.

Mr Dusadee noted similarities in how the Chanote title was issued for the 20-rai plot and for the land at Freedom Beach his office is also investigating.

He suspects it will take another two months to inspect the documentary evidence before the PACC can reach a conclusion as to who is involved.

Also, he was uncertain whether the investigation into the 20-rai plot will be conducted by the same team currently investigating the Freedom Beech land.

“If this is true, the PACC will likely report their findings to the Office of the National Anti-Corruption Commission for their action,” he said.

More probes into Phuket land grab scandals are likely in the near future. Before the day’s end, Mr Prompong told the press he would next turn his attention to a 90-rai plot adjacent to the 20 rai already under investigation.

“We will investigate that next,” he said.