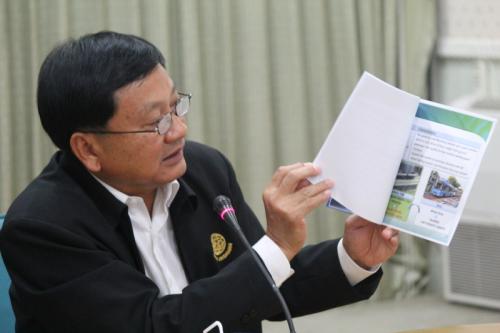 Speaking at a public seminar at the Pearl Hotel in Phuket Town last Saturday, held by the Phuket Real Estate Association specifically to discuss Phuket’s growing traffic jams, Governor Maitri pointed out that the number of cars on Phuket’s roads was spiralling critically upwards.

“Phuket has traffic jams simply because we have too many cars and not enough roads. According to figures from the Phuket Land Transportation office, from January 1 to September 30 this year more than 7,000 sedan cars were registered in Phuket. This number does not include other kinds of vehicles,” Gov Maitri said.

“If we lined up all the cars in Phuket end to end, they could make a line more than 200 kilometers long,” he added.

“Following the first-car purchase policy launched by Prime Minister Yingluck Shinawatra, Phuket might have more than 10,000 new cars on our roads next year,” he added.

Building new roads or upgrading existing thoroughfares was not the solution, he said.

“Even if we did build more roads, it is not a permanent solution to reducing traffic congestion. The only way to fix this problem permanently is to promote the use of mass transportation,” he said.

Regardless, Lert Padchawee, the deputy director of the Highways Department regional office in Krabi, which oversees the Phuket Highways Office operations, said his department had a raft of plans drawn up to alleviate Phuket’s traffic woes.

But those plans would cost 30 billion baht to carry out, he said.

Mr Lert explained that his office had plans to expand the airport spur road linking Phuket International Airport to Thepkrasattri Road, and hence to all the resort destinations in the south of the island, from two lanes to four lanes.

Other plans included much-reported underpasses at Central Festival Phuket, currently under construction, and at Samkong Intersection next to Tesco-Lotus and Bang Khu Intersection at the eastern end of the bypass road.

Also on the “shopping list” on road development projects were plans to expand the road joining Sakoo at the north of the island to Koh Kaew, upgrading the road linking Kathu to Kamala, and long-awaited road from Chalong to Patong, which has stalled as the proposed route passes through protected national forest.

“These plans will help fix the traffic problem in Phuket and the Department of Highways is now trying to propose all these projects to the government as urgent,” Mr Lert explained.

However, Kasem Chujarukul of the Department of Rural Roads disagreed. He sided with the governor in that public transportation was the only viable long-term solution.

“Traffic is a problem for many big cities around the world. Even developed countries that have the latest technology to monitor traffic flow still have difficulty in dealing with traffic congestion,” Mr Kasem said.

“Only mass public transportation can help fix traffic problems in the long run,” he added.

“The Department of Rural Roads commissioned Chulalongkorn University to conduct a research study into road safety and the traffic problem in Phuket. The results of that study showed that Phuket is now facing severe traffic congestion, problems with traffic signs, poor-quality roads and bad driving and motorcycle-riding habits,” Mr Kasem explained.

However, Mr Kasem added that there was light at the end of the tunnel in the form of the light-rail project.

“Phuket is planning to build a light-rail system that will be able to support the transport demands of the local people and tourists in the future,” he added.

Last year, many international construction companies sent teams of engineers to Phuket last year to assess the island’s need for a light-rail system and to formally offer their “expression of interest” to to build a light-rail in Phuket the then Phuket Governor, Tri Augkaradacha.

However, at last report, officials in Bangkok decided to ignore all such actions until a government agency had completed its own feasibility study.