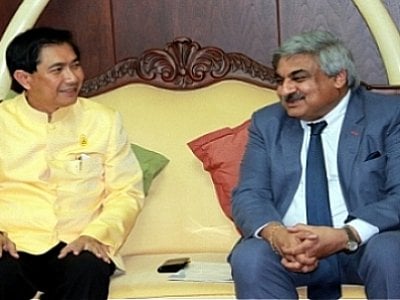 After the closed-door meeting at Phuket Provincial Hall this afternoon, Governor Maitree told the press that “Ambassador Anil agreed, and said he would raise the suggestion to involved officers for consideration.

“More than one million Indians came to Thailand last year, with many of them visiting Phuket and Phang Nga. Most of them come for weddings and their honeymoons, and one of their most popular activities is riding jet-skis,” Gov Maitree explained.

Ambassador Anil invited the governor to visit Port Blair, the capital of the Andaman & Nicobar Islands, noting that Port Blair and Phuket Province were twinned as “sister cities” in 2005, Gov Maitree said.