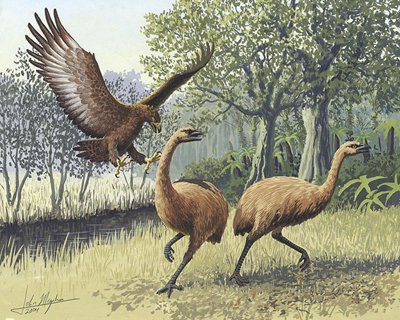 PHUKET: Australian scientists have found that bonds in a DNA strand could survive up to 6.8 million years under ideal conditions, longer than previously thought but ruling out the possibility of one day cloning dinosaurs as shown in the popular film “Jurassic Park.”

Scientists at Murdoch University in Perth studied 158 fossilized leg bones belonging to three species of the moa, a group of giant flightless birds which roamed New Zealand and are generally thought to have gone extinct by 1400. The bones were all recovered from sites within 5 kilometers (3.1 miles) of each other.

Using the fossil bone specimens, which were carbon dated as being between 600 and 8,000 years old, the scientists were able to calculate a DNA half-life of approximately 521 years. The half-life is the amount of time taken for an amount of DNA to reach 50 percent of the starting amount, and this decay rate is almost 400 times slower than previously predicted through simulation experiments.

“It has been agonizingly difficult to estimate the rate of DNA decay before now because finding a large set of DNA-containing fossils with which to make meaningful comparisons are exceedingly rare,” said Dr. Mike Bunce of Murdoch University’s Ancient DNA lab. “The moa bones however have allowed us to study the comparative DNA degradation because they come from different ages from a region where they have all experienced the same environmental conditions.”

The scientists estimate that, at an ideal preservation temperature of -5 ºC (23 ºF), bonds in a DNA strand could survive up to 6.8 million years. But the DNA would cease to be readable after roughly 1.5 million years, when the remaining strands would be too short to give meaningful information.

But more research will be required because the findings showed that the age of the fossils can account for only 38.6 percent of the variation in DNA preservation. “Other factors that impact on DNA preservation include storage time following excavation, soil chemistry and even the time of year when the animal died,” Bunce explained.

He added: “We hope to refine predictions of DNA survival by more accurately mapping how DNA fragments decay across the globe. Ultimately the models might enable better estimates of which fossils might work and prevent the destructive sampling of rare fossils which are thought unlikely to yield DNA.”

The findings essentially rule out the possibility of one day cloning dinosaurs as is shown in the 1993 film “Jurassic Park”, which is one of the highest grossing films of all time. The film features a billionaire businessman whose team is able to clone dinosaurs from DNA extracted from mosquitoes preserved in prehistoric amber.

The youngest dinosaur fossils ever found are about 65 million years old, but the research may suggest that extinct animals from the more recent past could one day be cloned. These animals include the woolly mammoth and saber-toothed tiger which both became extinct about 10,000 years ago.

The current record for the oldest authentic DNA sequence is 450,000 and 800,000 years old DNA from Greenlandic ice cores.

China’s economy set a record for growth in its first quarter, marking an 18.3% jump in year over year figures, the biggest quarterly growth in almost 30 years. China only started publishing growth statistics in 1992, and this drastic increase is the fastest growth recorded since then.

The figures, however impressive, are mainly due to what is called a “low base effect” where the change from a low starting point translates into big percentage statistics. Because of the devastating economic effects of the Covid-19 pandemic, the first quarter 2020 figures were dismal, allowing the big gain over the last year.