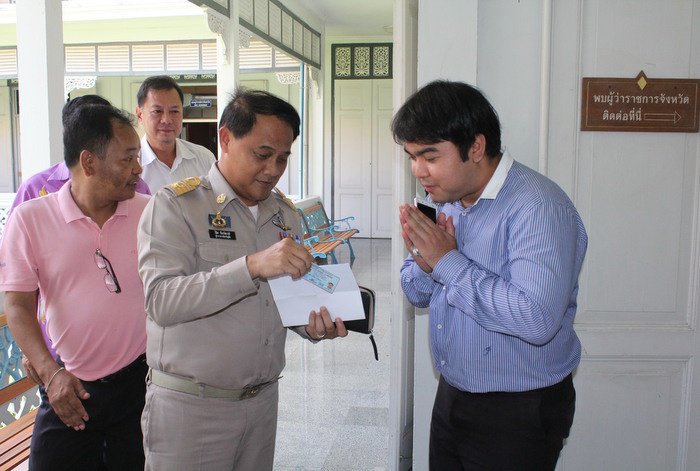 “However, they ended up handing over the wallet to the vice governor as they had to leave for Bangkok.”

After receiving the wallet, Mr Prapan checked inside to see if there was any identification.

“We found cash and checks with a total value of about 60,000 baht, as well as an ID and other cards,” Mr Prapan said.

The wallet belonged to Dr Napannop Waewsampan, 30, who works at a clinic in Patong.

Upon contacting Dr Napannop, Mr Prapan learned that he had been celebrating his birthday the night before at Rang Hill. Dr Napannop said he believed he had put the wallet in his back pocket, but when he got up to leave, he was unable to find it.

“Dr Napannop had already filed a complaint with the Phuket City Police,” Mr Prapan added. “He did not expect to get his wallet back, and said he would like to thank Mr Surachai.”

V/Gov Suthee brought the wallet to the Damrongtham Center today so that it could be returned to its rightful owner.

Governor Nisit joined the occasion and expressed his happiness for this act of kindness.

“I am very glad that Dr Napannop got his wallet back, and that we have good citizens in our country,” Gov Nisit said.