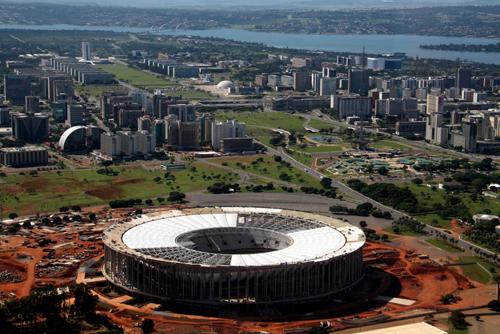 PHUKET: Brazil’s capital city, struggling to finish a new football stadium in time for an upcoming dress rehearsal for the 2014 World Cup, is turning to a surprising partner for help: the United Nations.

The Brasilia government signed this week a 35 million reais (11.65 million pounds) agreement with two U.N. agencies under which they will procure services and items such as tents, generators and security cameras for the stadium, a U.N. official told Reuters this morning (Phuket time).

The contract is one of the clearest signs yet that Brazil is running behind on the construction of stadiums and other key infrastructure for upcoming sporting events. Brasilia is due in June to host the Confederations Cup, widely considered a warm-up to test logistics and prevent any major hiccups at the World Cup, which will take place a year later.

The U.N.’s main advantage: It can acquire goods and services without going through the complex and lengthy procurement process required by the Brazilian government.

With the Mané Garrincha stadium only 87 percent complete, and a rapidly approaching April 21 deadline imposed by world football body FIFA for its delivery, time is of the essence.

“With the short time frame and the need to focus on finishing the stadium, the federal district government was not able to do the procurement on time with public bidding,” said Arnaud Peral, the U.N. Development Program’s deputy representative in Brazil.

Some of the temporary structures to be procured by the U.N. agencies for the Confederations Cup, which pits winners of continental championships against each other, will remain in place for the seven World Cup games that will be played in Brasilia a year later, he said.

Boaz Paldi, a UNDP spokesman in New York, said the arrangement with Brazil was “not entirely unprecedented” and the value of the contract could rise.

He said the UNDP has helped with past projects related to the Pan-American Games and the agency would gain “visibility” in Brazil due to its participation.