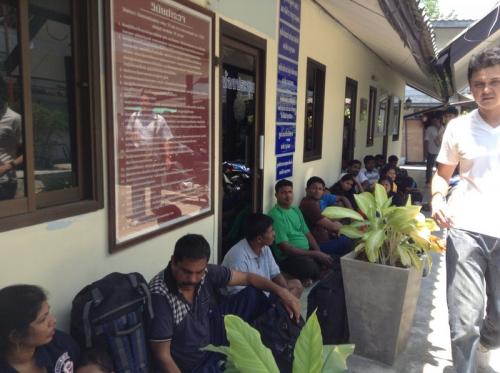 None of the refugees could present passports, he explained.

Some had United Nations High Commissioner for Refugees (UNHCR) ID cards identifying them as Sri Lankan nationals. One man had an ID card issued specifically by the Srilankan Tamil Refugees Organization of Malaysia.

The remainder had no identification documents at all.

“They have all been charged with illegally entering the country. They will be handed over to Immigration for deportation,” he added.

Chalong patrol police spotted the group walking past Wat Ladthiwanaram (map here) at about 11am.

“They were walking in small groups of three to five people each,” Col Krittapas said.

During questioning, the new arrivals told officers they paid an “agent” 300 Ringgit (about 3,000 baht) for each woman and 500 Ringgit for each man to travel to Thailand.

“The agent said they could get jobs with good money in Phuket,” Col Krittapas explained.

The group said they were brought to Phuket by bus, taking five days to complete their journey from Malaysia.

“They had no idea where in Thailand they were being taken. There was a different bus driver every day,” Col Krittapas said.

At the time of their arrest, the migrants were being led by a pickup truck and a motorcycle in front.

“They said they had been walking for about an hour and a half before they were arrested. We seized the motorbike, which had Phuket license plates, and we believe the man riding it was the group’s leader who was contact with the agent,” Col Krittapas said

“We have the agent’s mobile phone number. We have tried calling it, but it has been switched off,” he added.

Police are now trying to track down the pickup truck.

Police have also yet to reveal whether or not the suspects in the pickup truck were Thai and how many of them were involved.

Unlike standard procedure when taking Rohingya into custody, police today named the people placed under arrest, as follows: