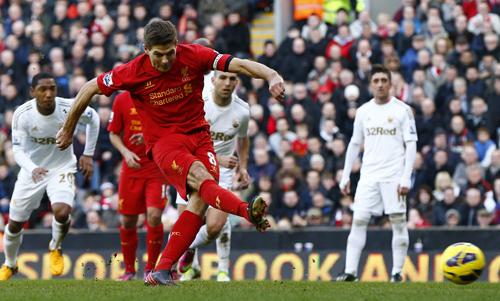 PHUKET: Brazilian playmaker Philippe Coutinho scored on his first start for Liverpool who leapfrogged Swansea City into seventh place in the Premier League by crushing the below-strength Welsh side 5-0 at Anfield yesterday.

Swansea manager Michael Laudrup rested a host of regular starters with next weekend’s Capital One (League) Cup final against fourth-tier Bradford City in mind, a decision which spectacularly backfired.

“I wanted to leave a few out but that’s not an excuse, we could have lost 10-0. We are all to blame, starting with me and the players,” Laudrup said.

“It was a nightmare, we got slaughtered out there. First half we were still in the game but to give away three goals like that in 10 minutes at the start of the second half was terrible, we have to say sorry to the fans.”

Steven Gerrard’s penalty on 34 minutes set Liverpool on their way, the midfielder making no mistake having had a spot-kick saved in the home defeat by West Bromwich Albion on Monday.

Coutinho, who joined last month from Inter Milan on a long-term contract, ran at the Swansea defence and beat keeper Michel Vorm soon after the restart to make it 2-0 as Liverpool quickly settled the game in a rampant spell.

Coutinho was also involved in the build-up in Liverpool’s third goal four minutes later, linking up with Luis Suarez before Daniel Sturridge crossed for Jose Enrique to prod in.

Suarez hit a fourth on 56 after twisting and turning in the area before Sturridge made it 5-0 with a second penalty.

It was Liverpool’s first victory over a team in the top half of the Premier League this season and a first for manager Brendan Rodgers over his former side.

Victory came at a cost for Liverpool after Italian striker Fabio Borini suffered a suspected dislocated shoulder and will miss the rest of the season.

Borini’s first season at the club after joining from AS Roma last July has proved difficult. He has scored just once – in a Europa League tie – and was out for over three months between October and January after sustaining a foot fracture.

“It looks like Fabio Borini has a dislocated shoulder which will keep him out for the season,” Rodgers said.

“He did a similar one at Chelsea on the other side. It’s a big blow for us.”

PHUKET: The Premier League’s big-hitters restored some normality to the FA Cup yesterday, after Arsenal suffered a shock defeat at home on Saturday to Blackburn Rovers 0-1, with holders Chelsea crushing third tier Brentford 4-0 in a fourth round replay while Manchester City dismissed Leeds United 4-0 in a fifth round tie.

Midfielder Frank Lampard scored his 199th goal for Chelsea who put four second-half goals past Brentford at Stamford Bridge to secure a fifth round clash at Championship (second division) Middlesbrough on February 27.

Argentine Sergio Aguero scored twice for 2011 winners Manchester City, who eased into the quarter-finals with a confident display that was the complete opposite from their abject surrender in a 3-1 Premier League defeat at Southampton last weekend.

“I think it was really important to win this game. If you score two goals within the first 20 minutes it is easier, but the FA Cup is a difficult competition as Arsenal and Everton showed yesterday,” City manager Roberto Mancini told ESPN.

Three second-tier sides reached the last eight on Saturday, including Blackburn Rovers who stunned 10-times winners Arsenal with a 1-0 victory at the Emirates.

Everton, sixth in the Premier League, were taken to a replay after conceding a stoppage-time goal in a 2-2 draw at third-tier strugglers Oldham Athletic.

England midfielder Lampard, whose Chelsea future remains unresolved with his contract expiring at the end of the season, tucked away a simple volley on 71 minutes to edge closer to Bobby Tambling’s all-time club record of 202 goals.

The goal prompted Chelsea fans to chant ‘sign him up’ as billionaire owner Roman Abramovich, sat with hands deep in his pockets, forced a wry smile high up in the stand.

Interim manager Rafael Benitez said: “The team was doing well and Frank Lampard is scoring goals, which is good for him and good for us.”

Chelsea twice had to come from behind to earn a 2-2 away draw in their first encounter and were again sluggish in the first half against their fellow Londoners.

Deft flick
Juan Mata finally broke Brentford’s resistance on 54 minutes when he latched on to Demba Ba’s flick from a long Petr Cech clearance and drilled in a left-foot shot from 20 metres.

Oscar doubled the lead 14 minutes later from Branislav Ivanovic’s cutback, scoring with a deft flick, and Lampard quickly added a third from Mata’s cross. John Terry headed in at the far post, this time from Oscar’s curling delivery, to make it 4-0 on 81 minutes.

“First half they made it very difficult, they sat very deep. Once we got the first goal, the second and third were sure to come,” Terry, returning after missing two matches with an inflamed knee, told ITV.

Terry said a British newspaper report yesterday that he and Benitez were involved in a dressing room bust-up were “complete rubbish”.

“There are stories today in the paper but it is complete lazy journalism,” the defender said, referring to a Sun newspaper story headlined “War”.

With his side 12 points behind Manchester United and their Premier League title hopes fading, Mancini had demanded his side atone for the Southampton loss which he had described as City’s worst game in the last two or three years.

City duly obliged, crafting a brilliant opener after five minutes that was started and finished by Yaya Toure.

The Ivorian exchanged passes with David Silva and Carlos Tevez before slotting home and Aguero doubled the lead on 14 minutes from the penalty spot.

Tevez bundled in a third after 52 and Aguero rifled in the fourth 16 minutes from time.

Journeyman Merrick sealed victory with a rock-solid par at the second extra hole, the driveable par-four 10th, after laying up off the tee with an iron and hitting his approach to 18 feet.

Beljan missed the green long to the left after using a driver. He left his chip short and then, after a long-range approach putt from just off the fringe, lipped out with a par putt from five feet.

Merrick and Beljan both parred the first extra hole, the uphill 18th, where Beljan had to sink a nerve-jangling six-footer to keep the playoff alive.

“Growing up here in LA, I just wanted to come to this tournament,” Merrick, who was born in Long Beach, said greenside after booking a place at this year’s Masters. “Now to win it, this is a dream come true.”

Merrick, 30, studied at the nearby University of California, Los Angeles (UCLA) and said earlier this week

VIDEO: This Week Today from the Phuket Gazette