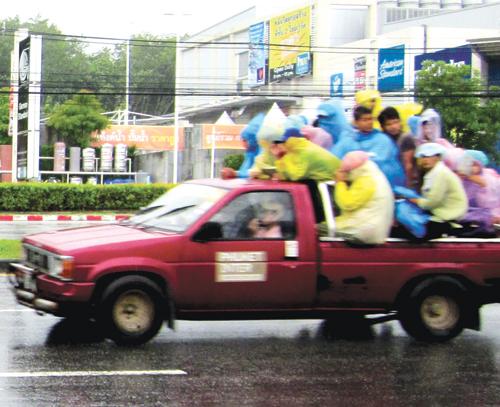 PHUKET: Employers of ‘low-skill migrant workers’ in Phuket and across Thailand have until March 16 to have their respective employees registered under the National Verification (NV) process, the Phuket Labor Office has confirmed.

Applying specifically to temporary laborers from Myanmar, Cambodia and Laos, the latest NV deadline is an extension of another extension.

The extension was from an earlier December 14, 2012 deadline, which itself was a six month extension from the initial deadline of June 15, last year.

“What action we will take against those who have not started the process by mid-April will depend on Cabinet’s decision on the matter,” she added.

She later clarified that the “mid-April” deadline actually refers to the deadline when the entire verification process should be completed – in other words, the date when “all documentation should already be submitted, and required health checks completed.”

According to the Labor Ministry website, the mid-April deadline is actually April 13, not April 15 as initially reported.

“The extension was for 120 days after the old [December 14] deadline,” Ms Yawapa confirmed.

Meanwhile, Myanmar has urged Thailand to speed up registration of its nationals working in the Kingdom, with nearly one million workers and hundreds of thousands of their children still undocumented as the deadline draws near.

Myint Thein, Myanmar’s deputy labor minister, was in Thailand recently to monitor progress of the government’s scheme to register millions of alien migrant workers under the NV process.

Thailand set up one-stop service centers in major cities throughout the country to facilitate the process. Myanmar has dispatched officials to 11 of the centers, Myint Thein told a press conference.

Myint estimated that some 1.2 million migrant workers from Myanmar have been registered so far, while another 1 million or more remain undocumented.

The NV centers have the capacity to provide service to 500 – 1,000 migrant workers per day.

Myanmar wants Thai authorities to issue special entry visas for children who accompany or depend on parents working in Thailand.

“We would like children who are dependent on parents working in Thailand to have documentation so that authorities can provide protection and social welfare for them,” Myint Thein said.

It is estimated that migrant workers in Thailand are accompanied by 200,000 children, he said, noting that half of them are of school age.

“We want them to be able to continue their education. If they have documents, they will have a chance to be educated,” he said.

The Myanmar minister said the expense of obtaining documentation in Thailand was too high for Myanmar migrant workers. Many of them have to pay as much as 15,000 baht, according to Myanmar Ambassador to Thailand, Tin Win.

Migrant workers have to pay 1,800 or 3,600 baht for a one-year or two-year work permit, respectively, according to the Department of Employment.

“This process is not expensive for the workers and many of them have to pay private brokers,” he said. “We don’t know how private brokers intervene in the process and take such a large amount of money from the workers,” Tin Win said.

The ambassador urged the Thai authorities to monitor the process and find a solution to reduce workers’ expenses.