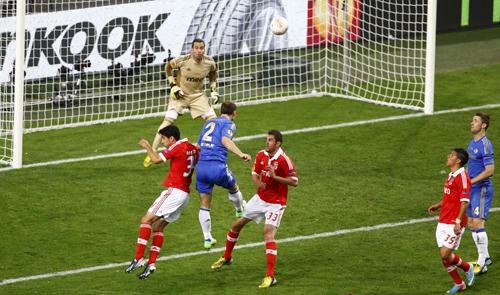 The Serbian defender, sidelined for the final against Bayern Munich 12 months ago through suspension, climbed high at the far post to meet Juan Mata’s corner with a looping header that arched over keeper Artur and into the back of the net.

The goal sent the London club’s blue-decked fans into raptures and meant Chelsea became the first English club to win all three of UEFA’s major trophies.

Ajax Amsterdam, Bayern Munich and Juventus are the only other teams to have won the Europa League, European Cup and the now defunct Cup Winners’ Cup.

Fernando Torres had put Chelsea in front with a well-taken solo goal in the 59th minute before Oscar Cardozo replied for Benfica from the penalty spot nine minutes later after Cesar Azpilicueta handled in the box.

“This is a great feeling,” Ivanovic told ITV Sport after the Stamford Bridge club won the 68th fixture of a marathon season.

“The team deserved this because we have had a very difficult season and a lot of games. We deserve that trophy.”

Victory also allowed interim manager Rafa Benitez, who took over from Roberto Di Matteo when the Champions League-winning Italian was sacked in November, to pick up his first piece of silverware at the London club.

The Spaniard will leave at the end of the campaign, with media reports suggesting Jose Mourinho is quitting Real Madrid to return for a second stint in charge at Chelsea.

Benfica, smarting from Saturday’s 2-1 defeat by Porto in their domestic title showdown, started the game the brighter and Paraguayan sharpshooter Oscar Cardozo headed over from close range in the second minute.

The Portuguese side, desperate to end a run of six straight defeats in European finals, also went close 12 minutes later when Chelsea had to hack the ball to safety following a goalmouth scramble.

With their animated coach Jorge Jesus gesticulating wildly from the touchline, Benfica looked in complete control.

Chelsea, for their part, had to again rely on the battling qualities that stood them in good stead in last year’s victorious Champions League campaign.

Frank Lampard, captain in the absence of John Terry who agonisingly missed out on a European final for the second year in a row after being injured in Premier League action at the weekend, then went close to putting his team in front.

The England midfielder, who became Chelsea’s all-time leading scorer last weekend with his double against Aston Villa taking his tally to 203, took aim from 25 metres out and his venomous, swerving effort was tipped over the bar by Artur.

Jesus was again like a jack in the box on the touchline at the start of the second half, imploring the 1961 and 1962 European champions to drive forward.

It was Chelsea though who snatched the lead as Torres struck with a goal reminiscent of his wonder strike in last season’s Champions League semi-final in Barcelona.

A throw from keeper Petr Cech was flicked on near the halfway line by Mata and Torres streaked clear before calmly rounding Artur and slotting the ball into the empty net from a tight angle.

Torres marked his ninth goal of the season in European competition by dropping to his knees and celebrating in Usain Bolt fashion by pointing his right arm skywards.

Oscar Cardozo levelled for Benfica with his own ninth European strike of the campaign, driving the ball straight down the middle of the goal from the penalty spot after Cesar Azpilicueta unnecessarily handled in the area.

Central defender Luisao was then booked for a reckless challenge on the edge of the box on Torres who was beginning to prove a real thorn in Benfica’s side.

The Benfica fans paraded a huge 50-metre banner at their end of the Amsterdam Arena stadium proclaiming ‘Nos Acreditamos’ (we believe).

The dangerous Oscar Cardozo certainly showed that he believed as he sent in a dipping long-range volley that had to be expertly tipped over by Cech in the 82nd minute.

Chelsea also went close when Luisao launched a brilliant goal-saving tackle in the box to deny Ramires as the former Benfica midfielder looked set to score for Chelsea.

Lampard produced another wicked long-range drive with his right foot that rattled the Benfica bar with keeper Artur clawing at thin air.

Then with extra-time looming, up popped Ivanovic to complete the full set of European trophies for Chelsea.

A visibly emotional Jorge Jesus later seemed to indicate his days might be numbered at Benfica.

“In these last few weeks the club and I have been talking about the future,” he told a news conference. “This defeat today will lead me to take some time to think more about these issues.

“The game gave me pride to be in the final and Benfica showed the world we are a team with great quality. The fans deserved Benfica to win for the emotion, passion and patriotism they showed and this defeat has really hurt me.”

The Serbian defender headed a stoppage-time winner from a corner to secure a second successive European trophy for the Premier League side after they won the Champions League for the first time last season.

“This team deserved this, because we have had a very difficult season and a lot of games,” Ivanovic, suspended for the 2012 showpiece which Chelsea won after a penalty shootout victory over Bayern Munich, told ITV.

“In the end, today was a very hard game and Benfica played very well. But we scored from set pieces and work very hard preparing that part of our game. We deserve that trophy.

“It was a great feeling to play a final, another European final for us as a team and a great win for us. Now it is time to celebrate.”

Chelsea were playing their 68th game of a marathon season and were only in the Europa League after dropping into it after becoming the first Champions League winners to be eliminated in the group stage the following season.

“No-one deserves this more than Ivanovic – he has been fantastic,” he said. “You make your own luck, and we stick together in this group. The club deserve it.”

Chelsea had led through a fine Fernando Torres goal just before the hour, the Spaniard rounding keeper Artur to fire home. Benfica, who had been the better side in the first half, levelled from the penelty spot nine minutes later through Oscar Cardozo.

“I am very happy. It was a very tough game, and Benfica were much better in the first half,” the Spaniard said.

“The first half was not good enough at all. We really wanted to win this Europe League, and maybe this was going to be our only chance.”

Beaming interim manager Rafael Benitez, taking charge of the Londoners for the penultimate time before he steps down at the end of the season, praised Chelsea’s improved efforts after the break.

“That was a great performan

Bangkok officers in Phuket to stamp out public butts