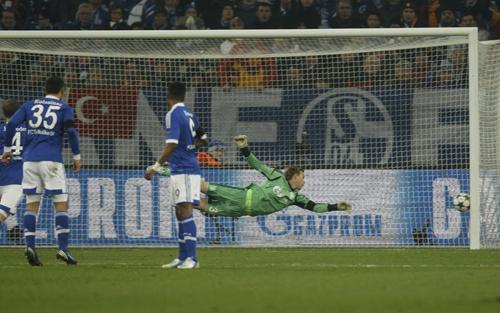 PHUKET: A fired-up Lionel Messi answered his critics by inspiring Barcelona to a sensational Champions League comeback against AC Milan last night with two goals in a 4-0 home win to help them reach the quarter-finals.

A rampant Barca, all-but written off after a surprise 2-0 reverse at Milan’s San Siro stadium in last month’s last 16, first leg, came storming back at the seven-times European Cup winners to progress 4-2 on aggregate after a memorable night.

They looked to Messi to spark a fightback and the four-times World Player of the Year did not disappoint with a scintillating display backed up by midfield trio Xavi, Andres Iniesta and Sergio Busquets and fullbacks Jordi Alba and Daniel Alves.

Barca were ahead at the Nou Camp in the fifth minute through Messi’s brilliant curling effort and the Argentina forward, who has suffered rare criticism in recent weeks, levelled the tie on aggregate five minutes before halftime with a low drive.

Barcelona ruthlessly dominated, with Milan struggling to get the ball out of their own half for long periods, and David Villa struck a third 10 minutes after the break before Jordi Alba netted a breakaway goal in the second minute of added time.

Before Alba’s effort finally killed the tie, Milan had pressed forward looking for the goal that could have sent them through and there was a palpable release of tension in the giant arena when the Spain fullback’s shot hit the back of the net before the celebrations began in earnest.

Barca’s win makes them the first team in the Champions League to ever overturn a two-goal first leg deficit without the benefit of an away goal while only four sides had successfully fought back from a deficit of more than one goal.

“We started really fired up, as you have seen,” Villa told Spanish television.

“The early goal helped us a lot, but it was something we looked for from the first minute,” added the Spain forward, who has struggled for form since returning from a broken leg sustained at the end of 2011.

“We believed we could do it from the first minute, in fact from the final whistle of the last game,” he said.

“We are delighted for the fans. We always believed we could do it. For them, and with them, we have done it.”

Galvanised by a superb swerving strike by Hamit Altintop against his old club, the Turkish side dominated the first half, held on for grim life in the second and snatched the last 16 second leg 3-2 with a stoppage time goal on the break against bewildered opponents.

Their 4-3 aggregate win justified their decision to splash out on big-name signings Wesley Sneijder and Drogba in January while Schalke became the first German side to exit the Champions League proper this term.

With Borussia Dortmund already through and Bayern Munich set to clinch a last-eight place on Wednesday when they host Arsenal with a 3-1 lead in the bag, Germany’s three teams had been in imperious form, losing only one match between them before Tuesday.

“It’s incredibly disappointing for us,” said team captain Benedikt Hoewedes, whose team are fourth in the Bundesliga and face a battle to qualify for the Champions League next season.

Ivory Coast forward Drogba, who missed a penalty in a league defeat against Genclerbirligi on Friday, was hugely influential on his favourite Champions League stage after his short stint in Chinese football.

The 35-year-old triumphed in last season’s competition with Chelsea after scoring a late equaliser in the final against Bayern and netting the winning spot kick in the shootout.

He looks hungry for more success but Galatasaray’s progression to the quarters for the first time since 2001 seemed unlikely when Roman Neustaedter gave Schalke a 17th-minute lead completely against the run of play.

It was wiped out by Altintop’s effort in the 37th minute when he collected a free kick and scored with a 30-metre shot which swerved away from Timo Hildebrand and went in off the foot of the post.

PHUKET: Arsenal’s Arsene Wenger has lost his touch in the transfer market and the standard of players at the club has fallen, the club’s former manager George Graham said yesterday.

“In the last few seasons, the standard has slipped because the players coming into the club, in my opinion, are inferior to the players that were there seven years ago,” Graham, who managed Arsenal from 1986 until leaving under a cloud in 1995 following a scandal over illegal payments, told Talksport Radio.

“His first spell at the club was phenomenal: three League Championships, four FA Cups, finishing in the top four for 15 years – that is a phenomenal record.

“But he has raised his own bar and he has to ask himself if he has fallen a little bit.”

Arsenal have sold some of their most influential players in the last two years including Cesc Fabregas, Robin Van Persie and Samir Nasri and are approaching an eighth season without winning a trophy – something that was unimaginable in the first half of Wenger’s reign.

After Graham left, Arsenal were managed by Bruce Rioch for a season before Wenger arrived in September 1996 and transformed the club.

Graham, who led Arsenal to the title in 1989 and 1991 and also won the FA Cup, League Cup and European Cup Winners Cup during his tenure, continued: “It’s all about players. If you are a great manager, it’s down to the players you put on the pitch.

“Arsenal have never been big spenders. When Wenger first came to the club, he was buying them at bargain prices and making them into world-class players.

“But the last few seasons it’s been slipping away gradually. The onus is now on finishing in the top four, whereas before the onus was on winning the Premier League.

“The first thing you have got to ask is who is bringing the players to the club? Is it Arsene or is it the scouting staff? Who has he got, not just in England, but all around the world?

“You’ve got to ask who is bringing in the players of the quality that was brought in during his first six or seven years at the club.

“That has been the problem. The quality coming in now is not of the quality it was when he first came.”

Arsenal are fifth in the Premier League and battling for a place in the Champions League for a 16th successive season.