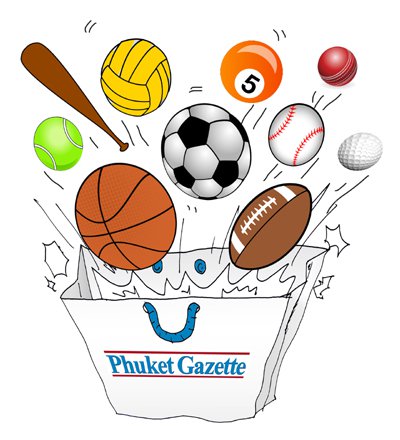 PHUKET: The starter’s gun has fired and first out of the blocks is this week’s Phuket Gazette sports round-up.

Your international sports page features a sprint through the Premiership with a glance to the side at Spurs’ rout of Newcastle, Thierry Henry’s parting gift to Arsenal, Zambia’s African Cup of Nations win, another Luis Suarez shake-down and why Carlos Tevez is back in the dog house.

Read about the Six Nations rugby debacle that caused 80,000 fans to be sent home without having seen a minute of France’s game against Ireland. Also, match reports on Italy’s missed opportunity to beat England for the first time, and Wales’ march towards the title after defeating Scotland.

We take a look at one of the world’s fastest growing water sports and follow local paddleboarders on their excursion between Phi Phi and Lanta.

The Village cricket team claimed the scalp of the reigning Island Furniture League champs, Patong in a shock defeat. But in a less than shocking result, the Phuket Cricket Group (PCG, or is that PCC?) XI were given a master class in batting and a lesson in pace bowling by the Marylebone Cricket Club (pretty sure that’s MCC).

France now sit atop the U14 division of Phuket’s Fair Play League (FPL) with Argentina heading the U11 division, while youngsters with a passion for diving after a football are being given a chance to hone their skills at the Brazilian Soccer Schools goalkeeping course next week.

Jog on down to your local newsagent and grab a copy of this week’s Gazette for all your sporting news.