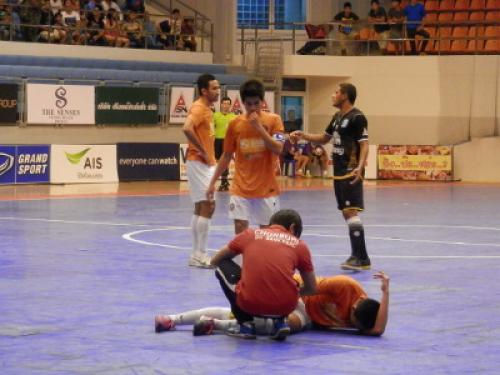 PHUKET: Top of the table Chonburi GH Bank ABAC were too strong for a spirited Phuket United, with the Andaman Pearl losing at home 3-2 last Saturday night.

The high tempo match – the 14th match of the GMM Sport Thailand Futsal Premier League 2012-2013 season – was played in front of about 1,200 vocal supporters at the Saphan Hin Indoor Sports Complex in Phuket Town.

Going into the match, Phuket United were on a winning run, having beaten Lampang United, Royal Navy and CAT FC in their previous three matches.

Phuket players and supporters were hoping such improved run of form would continue against the Chonburi “Sharks”, who boast four key Thai international players on their starting lineup.

The first half was played at a blistering pace, and it was the visitors who broke the deadlock when Sarawut Jaipet turned a Phuket defender on the edge of the box and placed the ball into the bottom left corner of the goal.

The score remained 1-0 going into half time.

Phuket United’s goalkeeper, Parinya Pundee, pulled off a number of excellent saves to keep the score line down, but he had no chance to deny Chonburi’s second of the game, just after half time.

Blocking out Phuket’s defender, pivot Suphawut laid off the ball for team mate Kritsada, who just outside the area smashed a shot into the top corner past a helpless Pundee.

Jardel manged to bring Phuket United back into the game pouncing on a goalkeeping error to bring the score to 2-1 in the 22nd minute.

Phuket United started to threaten more as they searched for an equalizer.

Feisty winger Jackson Santos placed his header wide of an open goal after Jardel had out-jumped the Chonburi keeper to knock the ball towards his fellow Brazilian.

Jardel eventually equalized for Phuket in the 32nd minute but a lack of concentration allowed the visitors the upper hand once again, Kritsada breaking away in the 35th minute to score his second of the match – what would be the winning goal for Chonburi.

After the match Patt Srivijit told the Phuket Gazette: “Our team played well against Chonburi but were unlucky with the score. I hope fans come to cheer at our next home match.”

The defeat made Phuket drop two places to seventh. The team has the perfect opportunity to bounce back in their next home match on January 16 against Sripatum Sunrise Sisaket.

To be held at Saphan Hin Indoor Sports Complex, the match will kickoff at 7pm.

Adult tickets are 100 baht, while children 150 centimeters or less are admitted for free.