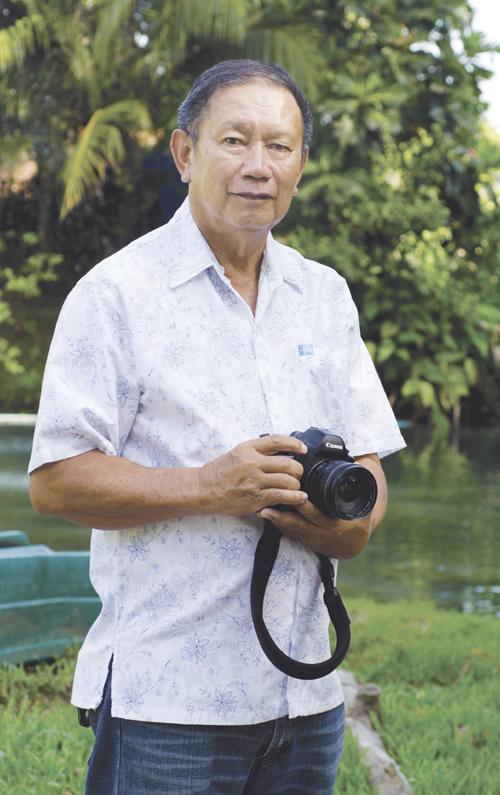 PHUKET: Photographer and retired lecturer Somchai Yimpat believes that in photography the argument over whether film is superior to digital has become moot.

“People focus too much on mediums,” he says. “The concern should be about what the final presentation will be. If it’s for exhibition prints, then film is definitely superior to digital. For sharing on the internet, digital is perfect because it’s cheap and fast.

Using photography and other media as a presentation tool is his speciality. Ajarn Somchai, as he is known to many, taught education and audio-visual aids (as it was called back then) at both Rajabhat and Prince of Songkhla Universities for 40 years, and is therefore an authority on the subject. He retired in 2005. However, his education work is far from over.

A keen photographer, Somchai has helped to create a community of local photographers. He taught at the now defunct Phuket Photo Association back in the 1980s, inspiring generations of young people to take up cameras. He has also witnessed the rising popularity of digital photography.

In 2012, he established the Phuket Shutter Club (PSC), a new type of cyber community that makes full use of social networking media.

It works very well, he says. The setting is informal as the club imposes neither strict rules nor membership fees and activities and announcements are usually shared online.

At the core of the PSC is an outreach program initiated by Somchai that involves teaching local school children the art of picture making.

As an educator who believes that learning is best done by doing, most of his time is spent outside the confines of the classroom. Somchai taught his first group of youngsters from Koh Sireh and the feedback, according to him, was exhilarating.

“The children were so thrilled that they got to lay their hands on cameras. I believe learning should be fun, creative and democratic. As a teacher, nothing pleases me more than to see all these ideas coming together.”

The outreach project, Somchai says, has the full support of the PSC’s members who have pitched in either by giving workshops or lending equipment.

Each two-day course includes basic camera use and compositional techniques. The emphasis is on picture taking and a review is given at the end of each session.

As the word got out, the program attracted interest from individuals and photo institutions in Bangkok who donated cameras and printers so that the children could see a tangible result from their efforts. They are also encouraged to turn their prints into postcards, which are then sent to the donors with thank you notes. “People love to receive these hand-made postcards. This tells them that their contributions actually reach the children,” says Somchai who has organized around 30 workshops thus far.

As a landscape photographer who enjoys travelling (he has just returned from a photo trip to Myanmar), Somchai won many awards in his day. Now he is more likely to sit on a panel of judges at a photo contest than to enter himself. He has also taken part in many group exhibitions and likes the idea of an outdoors show or installation. “Outdoor exhibitions are great; they break down the confinement of a white space. Plus they are easy to set up and fun.”

At 67, this retired lecturer is as active as ever. The outreach program, now held once a month, still keeps him busy. Along with teaching part time and taking photographs, Somchai’s days are full and varied. And in the offing is a planned show of his photos from Myanmar. Who says that retirement is a time to wind down?

The individuals profiled in “Thai Gallery” are chosen on the basis of their contributions to Phuket as an international community, and, often, for having made those contributions through successful social and/or working relationships with foreigners. This implies some foreign language skills and an interest in interacting with different cultures. They individuals are people who in our experience help make the lives of expats far more enjoyable here than might be the case without them.