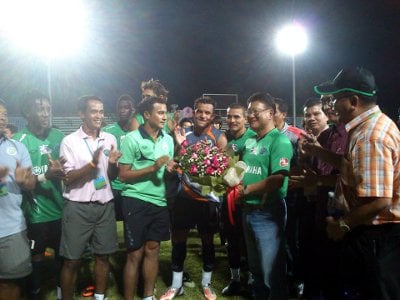 PHUKET: A beautiful second half goal by defender Nontaphan “Berm” Jiensathawong was enough to secure Phuket FC a 1-0 win over higher-ranked Navy in a match at Surakul Stadium in Phuket Town last night.

Just over 2,000 fans turned up for the match, which was played in perfect conditions and heavy security, including a detachment of uniformed Navy servicemen.

Navy dominated play at the start of the the first half, but Phuket started to find their rhythm and enjoyed some scoring chances before the break, though the scores stayed level 0-0.

The stalemate was broken on 76 minutes, when Nonthaphan took a free kick from 20 yards out, which found its way over the defensive wall and past the outstretched arm of the Navy keeper.

To watch the goal and other match highlights, click here.

Despite playing with just ten men in the final minutes after Marcio Santos was sent off with his second yellow card, Phuket held on for a hard-fought and much-needed win.

Though moving up one spot into 14th place, they remain in the relegation zone with 23 points, but just barely as six teams are clustered on the brink with 23 or 24 points.

After the match, the players presented bouquets of flowers to team president Pamuke Atchirayachai in advance of his birthday on Saturday.

Fans also congratulated him and thanked him for providing them with a free bus service to attend away matches. Pamuk warned them to be on their best behavior and to mix in with fans of the other teams during road trips. The warning came close on the heels of the recent unpleasantness the fans suffered after effectively being held hostage at Krabi Municipal Stadium last week.

Phuket’s next match will involve a bus ride to eastern Thailand to take on last-placed Chanthaburi FC on Sunday. Kickoff for that match, to be played at Chanthaburi Central Stadium, will be at 4pm.

Then they will travel to the capital, where they will take on tenth-place Bangkok FC at Chaloemprakiet Bang Mod Stadium in Thonburi, on Saturday August 18 at 5pm.

In yesterday’s biggest match, one with promotion implications, Krabi went down 4-0 at first-place Ratchaburi.

Phuket’s next home match will be on August 26, against Ratchaburi, who beat Phuket 3-0 in Ratchaburi in May.

Other Yamaha Division One matches yesterday:

Phuket Live Wire: Don’t get mugged by your mates