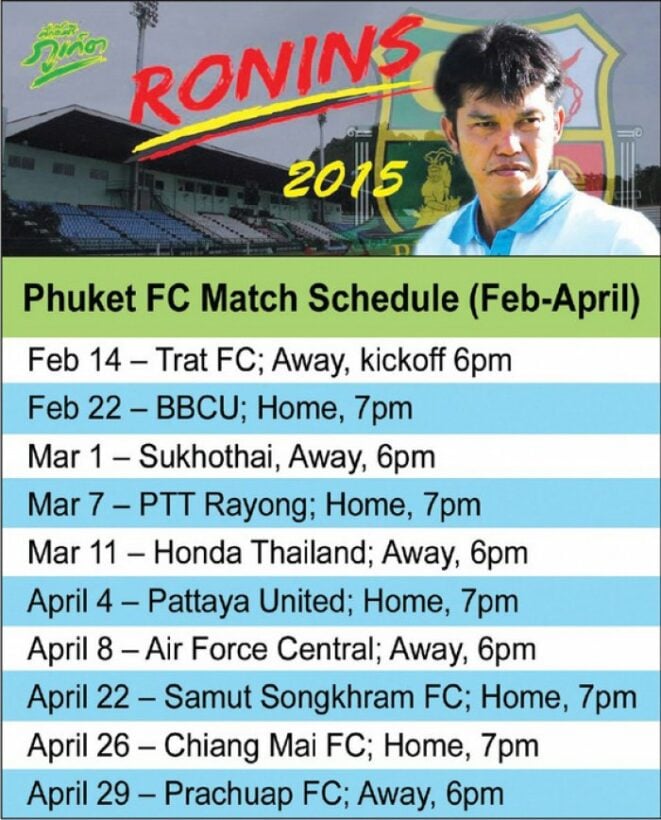 PHUKET: The island’s premier football club, Phuket FC, will open their 2015 campaign in the Yahama Division 1 national football league against Trat on Valentine’s Day, with the modest goal of surviving the hotly contested division.

“It is challenging to have new players join the squad and getting the whole team playing well,” a realistic Songyod “Coach Daeng” Klinseesuk told the Phuket Gazette on Wednesday.

“However, I think we are doing well and I look forward to seeing our players out on the field following our

The season opener is expected to help the team iron any wrinkles, he added.

“Regardless, their football skills are sure to make every game fun and entertaining, and most likely memorable,” Coach Daeng said.

Coach Daeng noted that Phuket FC’s “Ronins” finished a respectable 11th in the league table last year, and credited the fans for assisting the team in achieving that result.

“We wish for this year to be a good one for us,” he said. “We are thankful to all supporters and hope they continue supporting us. It means a lot to us.”

The Ronins will play 38 matches this season, four more than last year, as two teams have been dropped from the Thai Premier League to join Division 1, bringing the total number of clubs competing in Division 1 to 20.

The Ronins will play their first home match on February 22, when they take on BBCU at Surakul Stadium. Kickoff is set for 7pm.

The regular season will see at least three breaks in scheduled matches for international fixtures and cup ties, but will close on December 12, when Phuket FC play at home against Trat FC at Surakul Stadium.