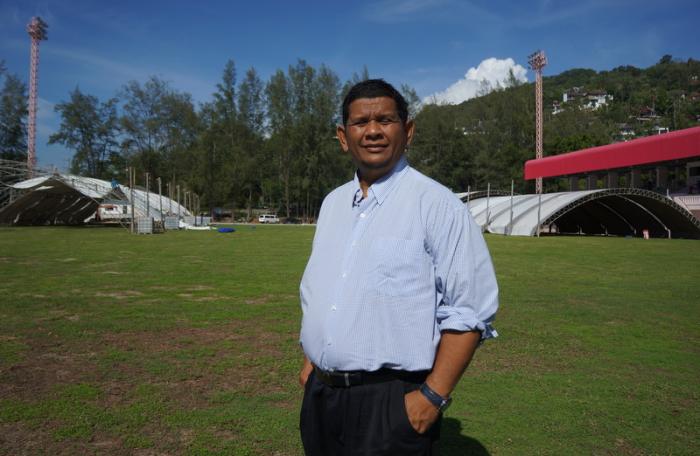 PHUKET: The president of the Phuket Football Club (Phuket FC) is fuming after news reports about the club’s alleged financial troubles went public earlier this month.

Reports stated that management owed club players and staff two months in back pay, amounting to more than 1.6 million baht. Reports also stated that electricity services were cut at the team’s headquarters, after 30,000 baht in bills was left unpaid.

“This whole issue is very upsetting to me,” Ma-Ann Samran, president of Phuket FC told the Phuket Gazette. “I have no idea why these news reports have circulated. This is an internal issue and we are working to remedy it. This news has done nothing but damage the reputation of the whole team as well as that of Phuket.”

Mr Ma-Ann officially took over the management of the football club in January, after the resignation of former president Pramookpisitt Achariyachai and other key management, after Phuket FC was demoted from Division 1 to Division 2.

Mr Ma-Ann said that running the club costs an estimated 1.5 million baht per month. Every home game costs the club 80,000 baht and away games cost 100,000 baht.

He does not refute that the club has run into financial difficulties, but said the reports of bankruptcy were patently false.

“I thought we would have sponsors to cover all the costs, but it has not turned out as expected,” he said. “All of the companies we have approached about sponsorship have turned us down.”

Mr Ma-Ann said the club’s other sources of income – ticket sales and souvenirs – are not enough to keep the lights on. He said Phuket FC has been carrying their balances forward, in hopes of increasing revenues and being able to pay their debts.

“We’ve talked with players and staff about the payment schedule, and the money issues we’re facing,” Mr Ma-Ann said.

“We actually owe them one month’s salary, not the two months as claimed in media reports.”
Mr Ma-Ann said that the Football Association of Thailand (FAT) has pledged 2.5 million baht to Phuket FC, but so far he’s only received 300,000 baht, and he is unsure when the rest of the money will be made available to the club.

Mr Ma-Ann is adamant that Phuket FC is not, despite reports, going bankrupt. “The utility cuts were the result of a simple misunderstanding.”

In order to mitigate the club’s financial losses, Mr Ma-Ann said he plans to make the team smaller, and to concentrate on recruiting cheaper-to-pay local players, instead of the current roster dominated by professional players.

“By making our team smaller, we can cut our costs down to 500,000 baht from the 1.5 million we’re paying now,” Mr Ma-Ann said. “Now that we’ve changed to a Division 2 team, we can be really competitive and host a smaller team with smaller expenses.”

Mr Ma-Ann said he’d considered suing media outlets for the false claims, but decided that it would be better to spread the word that Phuket FC is still in business.

“I didn’t want it to be a big deal, but this is really harmful to the team and to Phuket football,” Mr Ma-Ann said. “Our lawyer has prepared information for the outlet in question, and we will call them for a discussion and take it from there.”

Woman upset with daughter jumps down a well