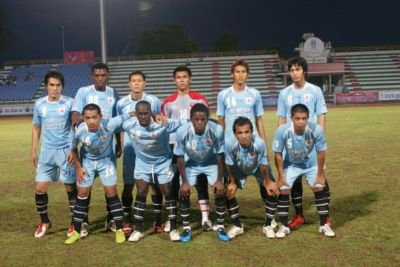 PHUKET CITY: The Sea Dragons of Phuket will face a stiff challenge this afternoon when they kick off against 2009 Thailand Premier League winners Muang Thong United.

The home side will bolster their line-up for the friendly match with former Thailand internationals Sarayud Chuaykhamdee and Somjed Sattabud.

Phuket FC has been out of action since the end of August, when they suffered a 3-0 defeat in Satun to complete a disappointing debut season.

In contrast, Muang Thong United finished their first season in the top flight as champions, winning 19 of 30 matches and losing just three times.

Tomorrow’s match at Surakul Stadium promises to be a very difficult test for the home side, but should serve as good preparation for the 2010 season.

Before the match, a Phuket VIP side will take on a Thailand VIP side, kicking off at 3.30pm.

The match follows four rain-soaked games last week, which have left the pitch more than a litle worse for ware. Today’s weather forcast predicts rain over 30 percent of the island, so it may be worth paying the higher ticket price for covered seating.

Tickets for covered seating are 300 baht. Open air seats are 100 baht each.

All proceeds will go to the Phuket FC team development program.

Phuket is not it for Michael Jackson fans