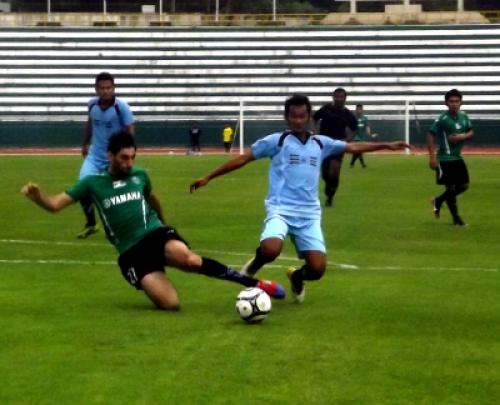 PHUKET: About 1,000 fans chanced the looming threat of rain on Saturday evening to come out and see the new-look Phuket FC in action against an unexpectedly strong Trang FC, in a friendly match in Phuket Town.

Played under overcast skies at Surakul Stadium, the pre-season friendly did not end up getting washed out by the rain, nor did it reward fans with any goals, with both sides unable to break the scoreless deadlock..

Nonetheless, scoring chances were enjoyed by both sides with Phuket FC rattling the crossbar a few times and Trang missing a number of glorious opportunities.

Aside from an all-star line-up of both old and new players, Phuket fans were especially pleased and surprised to see local keeper Kampon “Ice” Phatomakkakul suited up for action.

As previously reported, Ice was selected to represent the Thailand national squad in the 27th SEA Games to be held in Myanmar later this year, and he was expected to be at the national team training camp in Chiang Mai.

However, due to a rotating training schedule, Ice will still be available for Phuket some of the time, the Gazette has learned.

After the game, Phuket Head Coach Panipol Kerdyam told the Gazette: “Today was a good opportunity for me to assess our team. The players were a little exhausted from training everyday, but I was able to assess the areas we need to improve on, whether on running the systems or communication between the positions, as well as defending..

“It’s a good thing that we drew today… When we face a big team, we need to be 100 per cent ready. In any case, I know where we’re at and we’re still planning to bring in more players before the season begins.”

The Gazette also spoke with Brazilian striker Luiz “Dudu” Eduardo, who said: “We had many chances. We’re just beginning to work together. The coach had a hard time to get us to successfully execute some combination plays… Either way, the team played well and we will need to improve on a lot of things so we can hopefully win the [Division 1] championship this year.”

Bako, Trang FC’s Cameroonian coach said he was satisfied with his team’s performance. “Many of our players had just joined but we did good to stop Phuket and even had a few chances to score. As for Phuket, I was impressed with their midfield, but I think they had trouble finishing the score.”

Asked about his goals for the upcoming season, Bako was clear: “We need to make it to the Champions League again [by finishing as one of the top two teams in the Division 2 Southern Regional League], so we can get promoted to Division 1 and beyond next year.”

Phuket FC veteran Nenebi was in good spirits despite the draw. “This will be my fourth year for the team and I’m happy to continue to play here. We have a good team this year and have a lot of work before us to reach our goal and get promoted.”

Phuket United advance to round of 16

The island’s pro futsal team Phuket United advanced from the round of 32 of the Thailand Futsal FA Cup after defeating ATP FC 3-2 in a tough match up on Saturday afternoon.

The match was contested at the Fashion Island Futsal Arena in Bangkok with goals by Teerachit Janmas, Jardel and Akkadet Chuaiklai narrowly securing passage for the Andaman Pearl.

After the match, Assistant Coach Patt “Tum” Sriwijit said his team did not play so well. “We were tired from the travel and the busy league schedule, but luckily we were able to win this match.

It is still not known who they’ll meet in the Round of 16 on January 24 as the draw is taking place now.

Win or lose, the Andaman Pearl travel to table toppers TOS RBAC Chonburi FC in a tough away match on January 26 for their 16th fixture of the GMM Thailand Futsal Premier League 2012-2013 season.

With its all-star national squad line-up, Chonburi only narrowly prevailed 4-3 over the Pearl a week ago in Phuket.