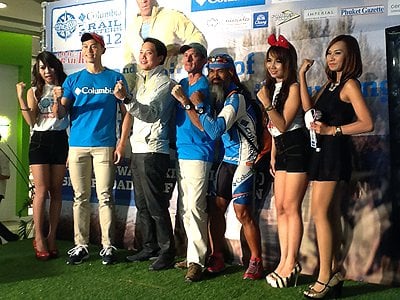 The Columbia Trailmasters 2012 Phuket Edition will add yet another stunning sport event to the Phuket calendar when it gets underway this Sunday (May 6) at the Thanyapura Sports and Leisure Club.

The competitions, comprising a 21.5km Off Road Half Marathon; a 10km Trail Run; and a Fun Run for kids and adults less athletically inclined, look set to see a very large crowd of participants in Phuket’s first formally organized trail running championships.

Sunday’s event is the second episode of the 2012 championships in Thailand. The first took place in Pattaya’s Khao Mai Keaw Forest in January and the third is slated for Phitsanoulok later this year (date to be announced).

The trail running series of events are organized by Active Management Asia, who have long been involved with off road sports in Thailand. The River Kwai Trophy Adventure Race is now one of the biggest in the whole of S.E. Asia.

Columbia, the well known outdoor sports gear specialist, teamed up with AMA last year to develop the first Trailmasters Race. This event proved so popular with racers that Columbia is sponsoring all three of this year’s events.

AMA believes that Phuket will become a favorite venue in the Trailmaster calendar and wants to encourage more athletes to participate in off-road running and to experience it as the safe, challenging, fun and popular activity that it has now become all over the world. It is for this reason that the Phuket Gazette and its television arm PGTV are proud to be sponsoring this Sunday’s events.

Registration to take part in the events is open until Friday, May 4 and can be done at ama-events.com, or by filling out the forms at any of the following locations in Phuket: