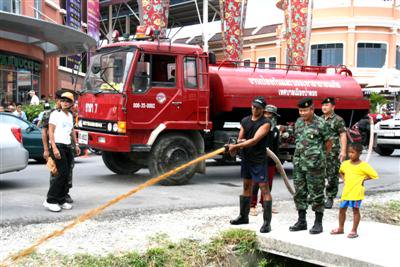 PHUKET CITY: In a bid to help the environment, a group of activists on Saturday released thousands of ‘effective microorganisms’ (EM) balls into the sea off Pa Khlok and into Klong Pakbang in Patong.

Starting at 9am in Pa Khlok, the group sprayed 5,000 liters of EM solution from a fire engine into Bang Rong Bay from the beach at Weerasatree Anusorn School. After that, they and about 100 volunteers took to the sea in eight longtail boats, dropping 10,000 hand-rolled EM balls along the seagrass line about a kilometer from the shore.

The activists hope the balls will spur the growth of seagrass, the staple food of the highly-endangered local dugong population.

First they sprayed 5,000 liters of EM solution into the klong, then dropped in 10,000 more EM balls at six different locations. They started behind Patong Hospital and worked their way down the klong, past Jungceylon and all the way to the bridge at Tri Trang Beach, were the klong empties into Patong Bay.

Local residents took an interest in the proceedings, which were also witnessed by Patong Deputy Mayor Chairat Sukhabaan.

Project Manager Ms Pareeya said researchers from the Phuket Marine Biological Center (PMBC) at Cape Panwa will monitor the water in both places over the next 15 days to see if the EM balls bring about the desired effect.

The group plans to continue spraying EM solution and dropping EM balls at both locations, monthly at Pa Khlok and weekly at Klong Pakbang, she said.

For our previous report about the EM ball project and the theory behind it, click here.