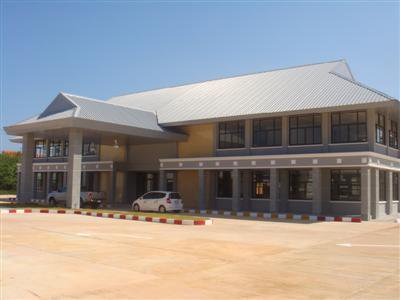 PHUKET CITY: The opening of Phuket’s new 128-million-baht bus station is on hold while authorities work out which organization will be put in charge of its operation.

Structural work on the station was completed earlier this month, with project contractor Anda Phuket Construction Co Ltd officially handing the structure over to the Land Transport Department on December 4.

Work on the station began in September 2008, after the Land Transport Department paid 80 million baht to acquire the nine-rai plot from a private landowner.

The station is located on Thepkrasattri Rd southbound, just south of Supercheap in Rasada District.

Anda Phuket project engineer Boonlert Pikulthong told the Gazette the work was completed within the contract cost of 47.98 million baht.

“After we signed the contact in September last year we started right away just to make sure we could finish and hand over the project before the December 12 deadline,” he said.

All work was completed according to project specifications, and no further changes or improvements are required, he said.

“We did not make a lot of profit from this contract. I just wanted to keep all my workers employed,” he said.

“As for the construction, I am quite happy with the new bus terminal. I think it is okay,” he said.

Phuket Land Transport Officer Kanok Siripanichkorn declined to estimate when control of the station will be transferred, but confirmed the two bodies under consideration are the Rasada TAO and the PPAO.

The agency is still waiting for both bodies to confirm their intent to run the terminal before making the final decision and consigning the terminal over to the chosen organization, he said.

The new station, officially designated as Phuket Bus Terminal 2, comprises two main sections: a covered platform with drive-up parking for 29 buses, and a two-story passenger building. Among the facilities on the top floor of the passenger building will be a restaurant, beauty parlor and a variety of shops.

“We plan to install an escalator and set up an air-conditioned section for passengers waiting to depart, but we still have to work out the details with the organization that agrees to run it,” he said.

What other facilities might be added will also be up to that organization, he added.

These will include routes to Pattaya, Nongkhai and either Betong District in Yala or Su-ngai Kolok in Narathiwat, both on the Malaysian border.

The biggest problem associated with the opening of the new station will be increased traffic congestion on Thepkrasattri Rd, because buses going off island will first have to head south then do a U-turn, he said.

It is hoped the Phuket Provincial Highways Office will soon build an elevated horseshoe-shaped U-Turn channel to allow buses to make an aerial crossing over Thepkrasattri Rd and head north without obstructing traffic flow.