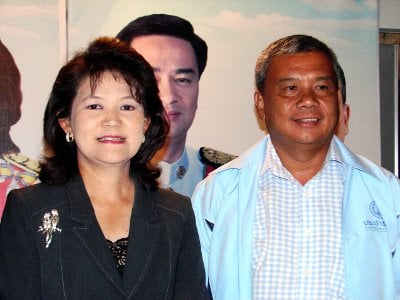 PHUKET: Raywat Areerob, the elected Democrat Phuket MP for the Phuket 2 constituency, this afternoon identified traffic, crime and drugs as voters’ three most-pressing issues that need to be addressed.

“While I was campaigning, people told me that the top three problems they need us to urgently solve are traffic congestion, increasing crime and drugs, especially in Pa Khlok and Yamu,” Mr Raywat told a press conference with fellow Democrat Phuket MP elect Anchalee Vanich Thepabutr this afternoon.

“Both Khun Anchalee and I will work as a team in addressing these issues,” he said.

The press conference at the Phuket Merlin Hotel was called to thank the media for promoting the July 3 election.

“Thank you to those who chose us as their representatives and for choosing the Democrat Party,” she said.

Mrs Anchalee also made clear that Pheu Thai winning the election would not affect approved projects in Phuket, such as the Phuket International Convention and Exhibition Center (ICEC) and the expansion of the airport.

“These projects have already received approval from the Cabinet and newly elected parties usually follow etiquette and do not cancel, delay or transfer the budgets of such projects,” she said, reiterating Mr Raywat’s announcement on June 30.

“Our national economy is not in crisis so the new government should understand the expectations of the people and allow processes to continue,” she added.

Mrs Anchalee explained that Abhisit Vejjajiva this morning resigning his position as Democrat Party leader was only fulfilling his democratic duty.

“Though it is not Abhisit’s fault, he has to resign in support of democracy. A new leader and executive committee will be selected within 90 days,” she said.

Guns, fights and ganja – but no election violence: Police