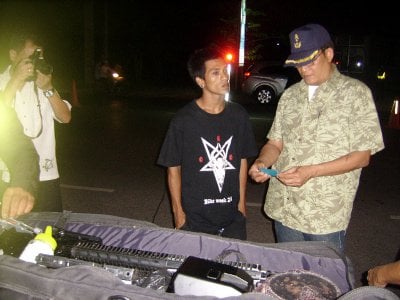 PHUKET: The police crackdown in Phuket in the run-up to the July 3 election landed a bumper haul of guns, drugs and arrests – but resulted in no arrests for violence related to the election.

A total of 45 factory-made and homemade guns were seized and 350 people were arrested for drugs since May 12, according to statistics issued today by Phuket Provincial Police.

More than 5,000 ya bah (methamphetamine) pills and 350 grams of ya Ice (crystal methamphetamine) were seized in raids and at road checkpoints across the island, along with more than 35 grams of marijuana and more than 20 kilograms of kratom, an indigenous plant ingested as a stimulant.

The crackdown was played out in four separate periods.

From May 12 to 26, officers seized 12 guns and arrested 12 people for possession of unlicensed firearms, while 142 people were arrested for drugs.

Two people were arrested for assault in incidents not related to the election.

From May 30 to June 12, police seized 16 guns and arrested 18 people on firearms charges, and arrested 97 people for drugs. Three cases of assault were reported resulting in two arrests.

From June 16-30, the crackdown netted 15 more illegal guns with 17 related arrests being made, and a further 102 people being arrested for drugs. Five cases of assault during the period resulted in four arrests.

Lending a hand, Muang District officers on June 22 arrested two men in possession of two unlicensed BB guns – one rifle and one pistol. The men were caught passing through a checkpoint in front of the Phuket Shooting Range near Chalong Circle.

The only election-related incidents during this period were two business operators – one in Muang District and the other in Tung Tong, Kathu – being charged with selling alcohol during prohibited hours for the absentee voting on June 26, and Tah Chat Chai Police arresting one person for destroying election campaign posters.

The last period of the campaign began last Friday and continues through Thursday this week.

So far during this period police have made seven arrests for drugs and charged one shop owner in Muang District for selling alcohol during election hours.