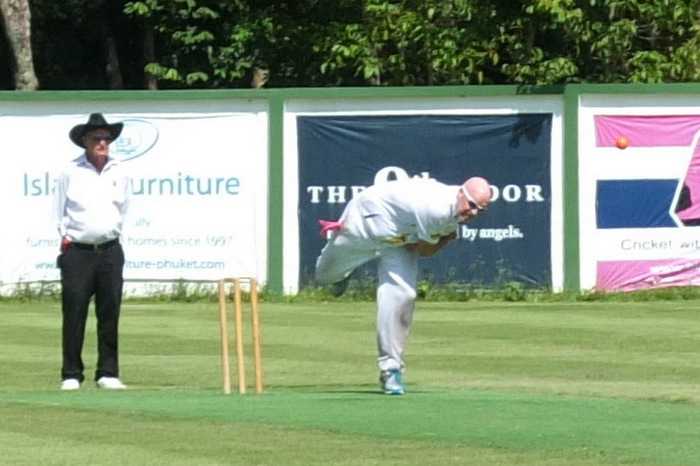 PHUKET: Laguna opened their account in the new Phuket Cricket Group (PCG) senior league by outfoxing Thalang in the opening match of the season, played at the Alan Cooke Ground (ACG) last Sunday.

As is tradition, the first match of the season was between last season’s finalists. Laguna, who had a disappointing T20 season, were looking to make amends after losing to champions Thalang in the final last season.

This season, a new format has been introduced whereby teams have an opportunity to achieve an outright win by bowling the opposing team out twice for less runs than the winning team’s total runs. However, a normal first innings win is also crucial to score points.

Laguna eventually prevailed to take the points with a 1st innings win by 52 runs after scoring 176. Thalang managed 124 in reply.

Despite heavy overnight rain, Laguna won the toss and opted to bat first, hoping to set a good target to defend against Thalang.

Openers Manish Sadarangani (31) and Iqbal Malik (17) set Laguna off to a good start, before Malik was bowled in the 7th over at 1 for 30. Sameer Khan (13) and Sadarangani put on another 30 runs before Khan top-edged an easy catch at square leg just before the 20 over drinks break at 3 for 80.

With the score on 96, one of cricket’s more unusual dismissals occurred with non-striker Sadarangani being run-out by Thalang captain, Bill Stahmer.

With Laguna finding boundaries hard to come by, Ali Khan gave the innings a much needed boost with his 40 runs, which included four towering 6s – one of which is estimated to have travelled more than 100 meters.

Ishmail Mohammed (29 not out) managed to bring the innings total to 176, but eventually ran out of batting partners in the 35th over (5 overs short of their allocated 40 overs).

Pick of the bowlers for Thalang were Gary Lane (3 for 38), Sam Ali (2 for 10) and Anthony Dupont (2 for 31). However, with 31 wides bowled, this will be an area requiring improvement by Thalang.

Thalang had 45 overs in which to attain the 177 runs to achieve a 1st innings win (being their allocated 40 overs, plus 5 remaining overs from Laguna’s 1st innings).

Laguna struck a blow early on, removing openers Anthony Du Pont (2) and Bill Stahmer (6) and had Thalang at 2 for 15 with an inspired early spell of bowling from Malik. Laguna’s bowlers soon struck again, removing Gary Lane (9) in the 7th over with Thalang at 3 for 26.

Thai youngster “Pao” (36) and Simon Wetherell (19) steadied the innings for Thalang with a 35-run partnership until Wetherell fell in the 14th over at 4 for 61.

Pao then combined with Craig Murphy (10) to put on a further 30 runs before a communication mix-up saw Murphy run out at 5 for 91.

With 23 overs in hand, Thalang required only 4 runs per over, but they could not afford to lose more wickets. After a spirited partnership of 17 runs between Pao and fellow Thai youngster Karn, Laguna managed to contain the rest of the Thalang batsmen bowling them out in the 35th over for 124.

With only 7 overs remaining in the day’s play, Laguna did not enforce the follow on – whereby the 1st innings lead is 50 runs or more – as an outright result was deemed unlikely.

The action continues this Sunday, when arch rivals Patong take on ICC in what is expected to be another cracker of a match.