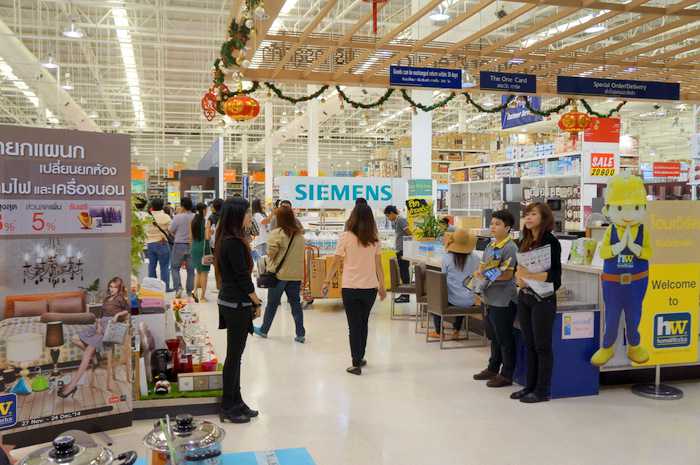 PHUKET: HomeWorks, the busy home-improvement store on Phuket’s bypass road, re-opened to shoppers today amid promises that the shelves had been inspected and were safe to use.

A shelf collapse at the store on Sunday resulted in a family of three, including an 11-year-old girl, being rushed to hospital with injuries after they were pummeled by falling paint buckets (story here).

Chanin Thiencharoen, the HomeWorks nationwide vice president for marketing, said that investigations were still underway to determine exactly what caused the eight shelves to tip over.

He indicated that the incident was most likely due to human error.

“A third-party technical inspection team sent by HomeWorks Head Office in Bangkok has confirmed that the shelves were structurally sound, in accordance with national safety guidelines. The shelves themselves are of a high standard and widely used in various retail outlets across the country,” said Mr Chanin.

Government construction surveyors were also called in to assess whether there was any structural damage to the building caused by the falling shelves. They reported that there was no damage done and gave the all clear for the store to re-open today, said the statement.

The shelves that toppled on Sunday, measuring 3.6 meters high, 11m in length and 1.2m wide, have been removed.

Mr Chanin revealed that compared to HomeWorks stores in other provinces, the Phuket branch experiences an unusually high rate of staff turnover due to employees leaving to join the island’s lucrative tourism industry.

“To counter this, we will increase the frequency of safety training to ensure all staff have full knowledge of necessary safety precautions,” he said.

“But as a precaution, we have also ordered safety inspections of all HomeWorks branches throughout the country.”

Mr Chanin confirmed that HomeWorks will cover all related medical costs and added that management had visited the family injured in the accident.

“Customer safety remains one of our top priorities at HomeWorks and we are confident that people can shop with peace of mind as we continually strive to provide the best possible shopping experience,” he said.

Pitchaya Saekim, 11, remains in the hospital.

“Doctors said that she can go home now, but I still want her to stay under observation since she doesn’t look so well,” Pitchaya’s mother Phatcharee Boontaley, 35, told the Gazette this afternoon.

“Managers from HomeWorks have already discussed with us about the medical bills and that they will take responsibility for everything.”