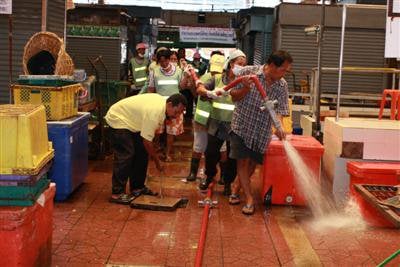 PHUKET CITY: A ‘big cleaning day’ was held at Kaset Market as part of celebrations marking the birthday of HM Queen Sirikit on Wednesday.

Municipal workers, shopkeepers and volunteers all got behind the effort, spraying the floors of the market with high-pressure hoses, picking up garbage and scrubbing the filthy floors with detergent.

Targeted for extermination by poison as part of the operation were the rats that infest the market, located downtown at the corners of Ong Sim Phai and Tilok Uthit 2 roads.

Scores of rats and cockroaches in their death throes scurried around the market after exposure to pesticides.

The anti-rodent offensive follows a pneumonic plague outbreak in northwestern China in late July that killed three people and resulted in the Chinese government quarantining a town of 10,000 residents for 10 days.

Phuket City Deputy Mayor Watcharapong Anantakul said the ‘big cleaning’ was just one of many efforts by the city to maintain a clean and healthy environment, which is especially important for a popular tourist destination like Phuket.

One market worker said, “There are a lot of rats and cockroaches living beneath Kaset Market, which is why this top-to-bottom eradication effort was needed.

“All of the shopowners need to maintain their stalls in hygienic condition and dispose of garbage in the bins provided. If we keep the market clean, people will continue to buy their fresh fruit and produce here.”

Is Phuket challenged in grasping the gist?