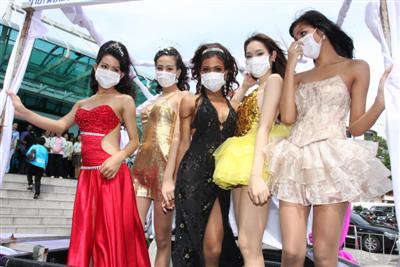 PHUKET CITY: The number of new swine flu cases reported in Phuket has been reduced by almost half, with 271 reported cases and the death toll still at two.

To help people who contract the type A(H1N1) virus that causes the disease, the Phuket Public Health Office (PPHO) has signed contracts with 12 private clinics to distribute the the antiviral drug oseltamivir free of charge, PPHO director Dr Pongsawas Ratanasang told the Gazette.

The clinics, which can source supplies from government hospitals, have already distributed 600 tablets under the program.

The tablets come in boxes of 10 tablets each and there are currently 44,000 tablets in stock in Phuket, enough to treat 4,400 patients.

Patients take two tablets per day, one in the morning and one in the evening, for five days.

Oseltamivir can treat normal H1N1 influenza as well as the newer A(H1N1) strain.

The drug normally sells for 250 baht per box.

Under the program, clinics can charge patients for consultation but not for oseltamivir, also known by its brand name Tamiflu.

Participating clinics are as follows:

Patients seeking treatment at the clinics are not given either the rapid test or blood test for A(H1N1), as these tests are only available at hospitals.

However, doctors can prescribe oseltamivir to patients presenting with a temperature above 38 degrees Celsius and other flu symptoms including cough and runny nose.

Generally, the drug is prescribed to people who fall into high risk groups, such as pregnant women and people with existing medical conditions like heart, lung or kidney disease.

Patients who fail to improve over 48 hours should report to a hospital for testing.

In order to assess resistance of the A(H1N1) strain to oseltamivir, mucus samples are collected from all patients who visit the participating clinics.

The samples are then sent to the Phuket Medical Science Center in Thalang for analysis.

The results are available in about one month, Dr Pongsawas said.

In cases where resistance is suspected, the alternative antiviral drug zanamivir can also be prescribed.

Most people with healthy immune systems can fight off the virus without medication, Dr Pongsawas said.

He warned against taking antiviral drugs unless they are really needed because doing so can lower one’s immunity.

The clinic program is the first of its type in the region and more clinics can join if they are interested, he said.

Phuket City’s Kaset Market gets a hose down

Phuket’s “little mermaid’ breathing on her own