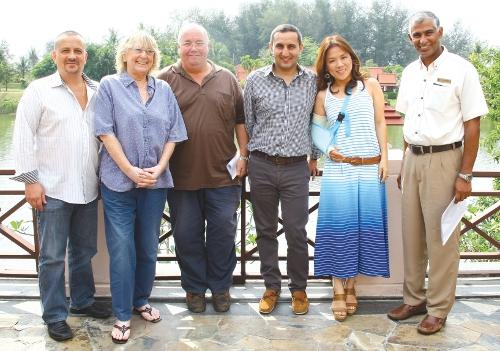 PHUKET: The Phuket Family & Gourmet Festival, held at Royal Phuket Marina on January 26, raised a whopping one million baht for children’s charities, it was announced this morning by the Bangkok-based food wholesaler Jagota Brothers, the creator and driving force behind the event.

The record-breaking sum for a single-event fundraising effort on the island followed a cash donation of 59,610 by the Phuket Gazette, the media partner for the launch edition of what now looks set to become Phuket charity’s largest annual festival.

Held for the express purpose of raising funds for the Andaman region’s less fortunate children, this year’s event pooled the talents of some of Phuket’s top chefs with the local musical talents of the Legends of Siam, Thai superstars Moderndog and the internationally renowned blues-rock trio Vdelli.

Driven and underwritten by Jagota and leading local businesses, a team of about 20 local residents donated hundreds of hours of work to sell tickets and fill the Royal Phuket Marina – all day and nearly half the night – with capacity crowds of families and delighted children.

The beneficiary charities for the full million baht so raised are the:

George Des, General Manager of Jagota, told the Gazette close to half a year ago that his company’s primary goal in creating the festival was “to put a smile on lots of kids’ faces”. It worked – and not solely on that single day.

Anand Jagota, CEO of the family company, says he wants to see even more money raised next year, with the focus on scholarships for children.