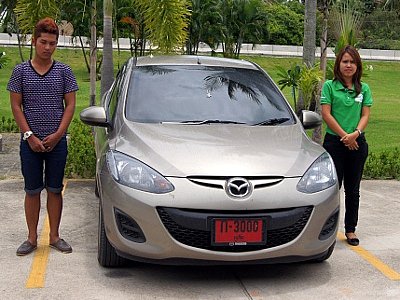 PHUKET: A 20-year-old man was arrested on Thursday afternoon after taking a brand-new Mazda 2 for a test drive from Phuket Town all the way to Wiangsa in Surat Thani, about 200 kilometers away.

Looking forward to a prospective deal, sales representative Thitaporn Markkaew agreed and accompanied Mr Beer as he drove the Mazda 2 away from the showroom.

But when they reached Tah Chat Chai at the northernmost tip of the island – at about 11am – Mr Beer drove into a side street next to the police station and asked Ms Thitaporn to get out of the car.

He wanted to pick up his boyfriend and didn’t want the lad to misunderstand his having a woman with him, he said.

He reassured her he would come back, said police.

Believing him, Ms Thitaporn got out of the car.

After several hours of waiting, a frustrated Ms Thitaporn walked off to Tah Chat Chai Police to report the car stolen.

After triangulating Mr Beer’s position from his mobile phone signal, police finally found him the next day. He was using his phone at a gas station in Surat Thani.

Only after arresting him did police learn there were outstanding warrants for Mr Beer’s arrest for charges of embezzlement in Lamphun, in Northern Thailand, as well as for robbery in Surat Thani.

He denied stealing the car, however.