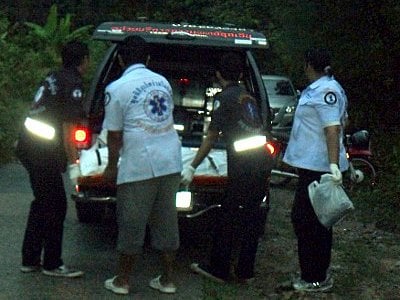 PHUKET: Phuket emergency response volunteers last night struggled in rain and darkness to recover the body of an unknown man from a ravine in Wichit.

The body was discovered at about 5:30pm yesterday by local plantation owner Kittidej Jingjit.

Mr Kittidej was en route to check construction of a hillside workers’ sala off Soi Anusorn in Wichit Village 3.

Noticing a strong order and presuming it to be from a dead animal, Mr Kittidej asked his workers to investigate.

Climbing down, the workers discovered the decomposing body of a man.

Arriving at the scene with Phuket Ruamjai Kupai rescue workers, the police found the body stuck against a rocky outcrop in the gorge.

Initial investigation revealed that the man suffered massive head trauma that left his face beyond recognition.

There were also deep lacerations in the right arm and left leg that left both limbs almost completely severed. At least 10 other stab wounds had been inflicted.

The victim was wearing only a pair of jeans and canvas sneakers.

Investigators found a bloodstained shirt and army hat nearby.

No identification documents were found on the body or at the scene.

Rescue workers needed to use a plastic stretcher, ropes and slings to hoist the body out of the ravine. The difficult operation was further hindered by the onset of darkness and steady rain.

From the location and state of decomposition, officers estimated the man had been killed four to five days earlier.

The man was probably murdered elsewhere and dumped in the remote location by his killer(s) in order to avoid detection, the police said.

Thai and Burmese people in the area questioned by police said they had no idea who the victims was.

No people were reported as missing from local communities, they said.

The corpse was reported as that of a man who was “tall and dark skinned”, but the race and nationality of the victim remain unknown.

Police said DNA samples would be taken to try to identify the man and bring his killer or killers to justice.

Anyone with information that could help police identify the deceased are asked to call Phuket City Police at 076-212155.