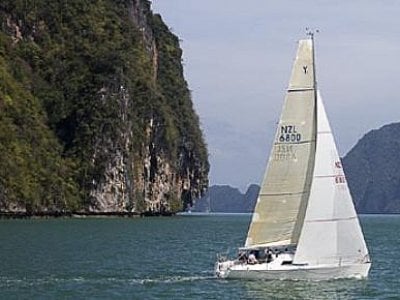 PHUKET: The 15th Bay Regatta got underway yesterday with crews’ patience and skills tested by a mixed bag of conditions on the first day of racing.

GoYachting’s Richard Valentine remarked on the unusual weather.”The regatta gave us a little bit of everything,” he said. “Some sunshine with blue skies and wind early on, then the wind died and we were hit with full-on thunderstorms,” he added.

Having kicked off in style with a lavish party at The Village Coconut Island resort on Koh Mahprao. Grenville Fordham, Commodore of the Ao Chalong Yacht Club – event organizers – advised competitors of new courses that would exploit more wind.

“We will sail into Phang Nga Bay, but not too deeply,” said Grenville.

Past regattas have enjoyed the beautiful karst topography in the Bay at the expense of little or no wind.

A special guest on opening night was Neil Pryde, who kindly agreed to help sponsor the regatta this year. Pryde’s HiFi, while not competing in The Bay Regatta, is a major contender to win every race on the Asian Yachting Grand Prix.

This year’s Multihull class is the largest ever contested in the Bay Regatta with 13 boats entered (including 4 Fireflys) and 43 boats registered overall.

Day 1 saw began off Koh Rang and took the boats through a course that finished at Koh Kudu. Participants motored to the anchorage just off of Paradise Koh Yao Boutique Resort & Spa, host of the regatta’s second party.

Principal sponsor of The Bay Regatta is DaVinci Yacht Charters, with Shane Granger’s historical vessel Vega signed up as the media boat. Vega annually makes humanitarian trips to East Timor and isolated Indonesian communities where it delivers much needed aid.

The Phuket Gazette and PGTV are sponsors of the 2012 Bay Regatta.