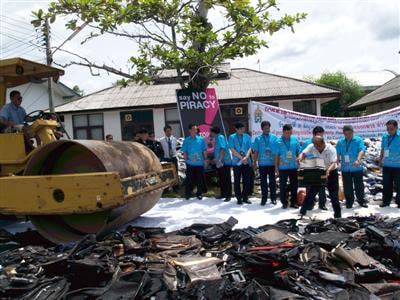 The event, which took place at the Phuket Customs House in Phuket Town, was presided over by hammer-wielding Deputy Finance Minister Pradit Pattaraprasit and Customs Department Director-General Somchai Sajjapong.

There was also an international flavor to the event, as top customs officials from 12 ASEAN nations also attended in the capacity of ‘honorable guests’.

The group are in Phuket for the four-day ASEAN Customs Director-General 19th Meeting that began on Tuesday at the Sheraton Grand Laguna resort in Cherng Talay.

Apparently impressed by the display, World Customs Organization secretary-general Kunio Mikuriya said, “As we observe, there is a strong commitment from ASEAN, including Thailand, to fight against IPR [Intellectual Property Rights] crime. Over 70 % of IPR seizures are done at the border by customs. So it is very important that customs takes a leading role in fighting against piracy.”

The destroyed goods were seized in 23 cases investigated by the Investigation and Suppression Bureau, together with Customs Control Unit of Customs Region 4, which covers Southern Thailand.

Deputy Finance Minister Pradit said “IPR infringement is still a major problem for Thailand. We don’t ignore it. We’re always taking serious action and continuously suppressing the problem. I hope the demolition of pirated goods will trigger Thai people’s realization of IPR. Once we know how significant it is, we can stop the piracy.”

Complete success will only come when consumers no longer choose to buy bogus goods and demand for them dries up, he added.

Though a number of arrests have been made, this year Thailand is still ranked in the Priority Watch List according to section 301 of the US Trade Act, Mr Pradit noted.

Failure to get off the dreaded Priority Watch List puts Thai exporters at risk of having to pay higher import duties for products entering the US, one of its major trade partners.

In fiscal 2009, the Customs Department made arrests in 648 IPR cases, seizing assets valued at over 290 million baht, according to the department.

It was not reported if the ASEAN contingent’s travel plans in Phuket included a tour of Patong, where roadside vendors do a brisk business selling knock-off products to foreign tourists in full view of authorities.