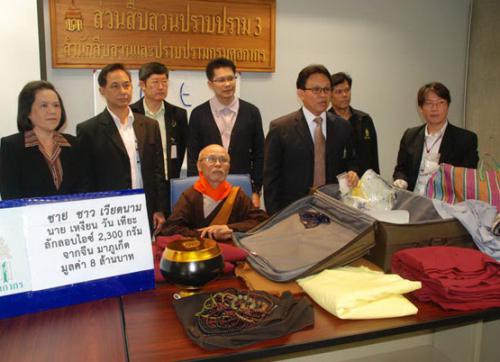 PHUKET: Customs officers at Phuket International Airport arrested a Vietnamese man dressed as a monk yesterday for attempting to smuggle more than 2kg of ya ice (crystal methamphetamine) into Thailand.

The drugs had an estimated street value of about 8 million baht.

“We asked him to put his baggage through the x-ray machine and saw a suspicious object inside. We opened the suitcase to find plastic bags of ya ice wrapped with carbon paper. In total, there were 2.3kg of the drug,” she explained.

Mr Nguyen arrived from Shenzhen on China Southern Airlines Flight CZ6093, which landed in Phuket at 1:20am.

“He claimed to be a monk on pilgrimage to Phuket. He said that before he boarded the plane, a Vietnamese woman asked him to take a suitcase with him to Phuket and hand it to another Vietnamese person when he got there,” Ms Montira explained.

“People were to pick him up from the airport and take him someplace to hand over the suitcase,” she added.

Mr Nguyen, who entered Thailand on a tourist visa, was not carrying any identification documents confirming he was a monk, Ms Montira confirmed.

“He was charged for the possession of a Category 1 narcotic and smuggling it into Thailand with intent to sell,” she added.

Indian national Aizawl Lalchhuanthangi, 37, was arrested on November 23 after attempting to smuggle 4.5kg of ya ice – valued at about 15mn baht – from Delhi (story here).

On December 9, 52-year-old Romanian Pop Florin was arrested at Phuket Airport for attempting to smuggle in more than 3kg of cocaine stowed in his luggage (story here).

“We will keep looking out for suspicious people and strictly screen foreigners visiting Phuket” Ms Montira told the Phuket Gazette.