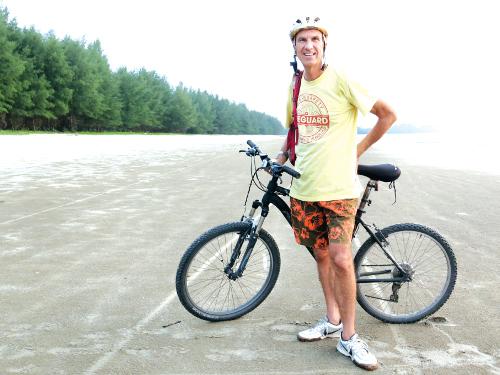 PHUKET: You know it’s going to be a good day’s cycling when you see more water buffalo than you do hurtling pick-up trucks, and when the smiling locals stop what they are doing and rush out to greet you with a hearty “Hello Farang!”

Such pleasures are rarely found in Phuket these days, but just 80 kilometers north of the Sarasin Bridge, we discovered a rather decrepit ferry which acted as a magic gateway to a laid-back world that reassured us that the “Land of Smiles” is not dead.

Just eight kilometers south of Takkua Pa on highway 402 heading north to Ranong, you’ll come to the village of Baan Muang. Here you’ll spy a large “Highway Police” building on your left and it’s here that you should turn to catch the ferry across the one kilometer stretch of silty brine to the confusingly named island of Koh Kho Khao.
My fellow Lycra Lout Steve Lawrence and I managed to get lost even on the short stretch of road from Highway 402 to the ancient creaking ferry, but a helpful granny in a sam-lor sprang to oxur rescue and led us to Nam Khem ferry pier. She didn’t look too prosperous and while I didn’t want to patronize her, I thought a few baht might prove helpful. But she was having none of such nonsense and waved my foolish baht away with a hearty gap-toothed smile and a “welcome to Thailand”. Well, that was a little different from most days in Phuket!

Koh Kho Khao is about 18 kilometers long and six wide and doesn’t look too different from the mainland, yet psychologically it’s a world apart. Its main attractions are long deserted beaches, ideal for great swimming and sunset walks; quiet traffic-free roads perfect for cycling and a sleepy laid-back ambience with locals who are genuinely happy you took the trouble to visit them.

The first clue that you are about to enter a different, slower world is the decrepit car ferry itself. Apparently, said ferry answers to no specific timetable and tends to make the twenty minute crossing to the island whenever it feels like it, or perhaps when there are enough customers to merit the ferry-boys leaving their beers and card games and springing into action. The ferry set us back the princely sum of 150 baht to transport Steve’s pick-up with our mud-spattered mountain bikes roped to the back, plus the two of us Lycra Louts over to the magic island.

Upon arrival at Baan Pak Koh at about 5pm, the island presented itself as a friendly place with a couple of taxis, restaurants, shops and a sleepy tour company with an ancient couple sitting outside eating som tam. They made a call and booked us into the excellent Hapla Beach Cottages half way up the island’s west coast and right on the beach. We then unloaded the bikes from the pick-up and set off for a sunset ride.

The island felt like a secret place – markedly sleepy and friendly, yet slightly haunted, possibly because it was seriously inundated during the 2004 tsunami. It is characterized by grassy sand flats towards its center and a sprawling area of mangroves and canals to the east. To the northwest there’s an overgrown air strip that was used by the Japanese during World War II. Other sights and activities include the small but pretty Toan Thong Waterfall in the northeast, a bird watching tower in the north and a kayaking operation that runs excursions into the northern and eastern canals.

The flat paved two-lane road ran straight from Baan Pak Koh all the way to the island’s northern coast and everything on the island seemed to be located down a series of side sois off this road. At low tide it’s possible to walk along the beaches for several kilometers shaded by the abundant Casuarina trees, but at high tide parts of the southern beaches become impassable.

We cycled until about 7pm and enjoyed returning to our pick-up, without bike lights, but perfectly safe with little traffic about and with a crescent moon and diamond-like Venus rising in the west to light our way home.

When we arrived at Hapla (literally “look for fish”) Beach Cottages the kitchen had already closed, but the couple who own the resort happily opened up and cooked us a wonderful supper of local crabs, prawns and fish. We’d brought a couple of bottles of wine with us, for which they charged us no corkage and then they left us to our own devices when they went to bed at 10pm, leaving the bar fridge open so we could help ourselves. We sat out in the beachside restaurant until 1am, watching huge Hermit Crabs weaving their trails across the sands and basking in the quietude.

Next morning after breakfast, we cycled to the far north of the island to Nok Nan Beach, a remote stretch of sand bereft of humanity but home to a boisterous herd of buffalo in their muddy plunge pools. In the north it’s also possible to cycle the dirt paths that wind deep into the mangrove areas to the east.

Historically, Koh Kho Khao was one of the first landing spots for the Diaspora of ancient settlers who spread across Southern Thailand and Malaysia, and before that was a popular topping-off point among Chinese and other traders during the Takua Pa area’s heyday as a tin mining center around the 15th century. The island was also a trans-shipment point on the Maritime Silk Route that started 2,000 years ago linking ancient Greek and Roman traders to Xian in China.

We returned to Phuket after only one night away and two delightful bike rides, but it felt as though we had reconnected with the real Thailand and the real joy of cycling in tranquility as it was meant to be.

Tech: Be forwarned about 4G in Phuket