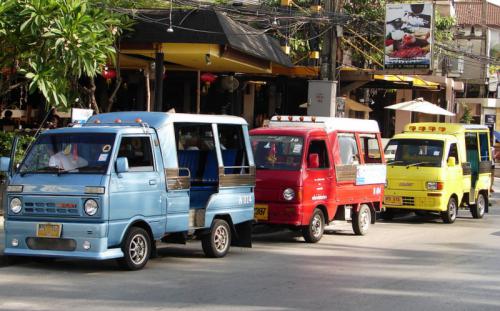 PHUKET: Patong police have declared success in dislodging taxis and tuk-tuks from parking spots on the Patong beach road.

“We succeeded in our goal of freeing up space between Prachanukroh Road and Soi Bangla. Each of the seven taxi ranks there are now limited to five vehicles each,” Patong Police Deputy Superintendent Akanit Danpitaksat told the Phuket Gazette this afternoon.

The freed parking spaces are now available to other locals, tourists and expats.

“We are continuing to enforce the new regulation that came into effect on December 31 [story here]. We want to make sure that there are spaces available for visitors when they come to Patong,” Lt Col Akanit said.

“We don’t have a deadline for that project yet. However, in the meantime, we will continue enforcing the rule along the beachfront road to keep it free,” he added.

Col Akanit stressed that anyone who encounters unruly or threatening behavior by a taxi or tuk-tuk driver should call 191 immediately.

“Unacceptable behavior includes being deceived; threatened; attacked; overcharged; taken somewhere that is not your agreed destination; prevented from entering another taxi or tuk-tuk; or forced to use a particular taxi or tuk-tuk,” he said.