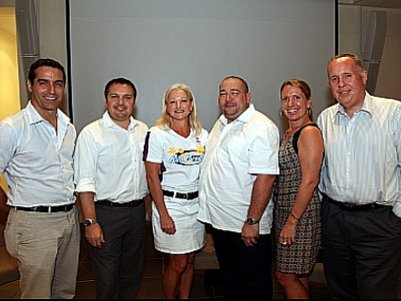 Attendees were told that Phuket is already on the map for major sporting events and that key officials are recognizing the economic benefits.

Titled “Identifying and Marketing Brand Phuket – Sports Tourism”, the event was held at the Thanyapura Sports and Leisure Club (TSLC) in Thalang.

Organized in conjunction with the Phuket PR Network, the seminar was is part of the American Chamber of Commerce (AMCHAM) Phuket Chapter series, exploring issues associated with “Brand Phuket”.

The opening address was given by Phuket Gazette property columnist Bill Barnett, who is also the Founder of C9 Hotelworks.

After the opening address, Debbie Dionysius, Assistant Vice President of Destination Marketing at Laguna Phuket, explained to a packed auditorium how the success of the Laguna Phuket Triathlon, Marathon and Ironman 70.3 has grown in recent years.

“We want to push forward the brand of Phuket for being the sports tourism destination with our renowned sports events: the Laguna Phuket Triathlon, Marathon and Ironman 70.3,” said Ms Dionysius.

“We started the Laguna Phuket Triathlon in 1994 and we’ve come from a small race where some triathlon athletes showed up from surrounding countries, to [being] one of the biggest triathlon competitions for athletes from across the world [to] attend.

“I believe we are on the right track to promote the Phuket brand as being the sport tourism destination,” she said.

Paul Poole, Founder of The Sponsorship Experts, said sponsorship marketing is integral to the survival and successful development of events on the island.

“We have packaged, sold and managed sponsorship and partnership opportunities for many companies and events. In Phuket, we’ve worked with many projects such as Phuket Raceweek, PowerPlay Golf, IronKids Phuket, the Laguna Phuket International Marathon and many more,” he explained.

Duncan Worthington, Media and Communications Director for the Phuket King’s Cup Regatta, highlighted the economic benefits that international events bring to the island.

“An independent survey in 2008, 2009 and 2011 found that participants spent more than 40 million baht on accommodation and F&B [food and beverage] during regatta week each year. This does not include travel to and from Phuket, money spent on boat maintenance or money spent before or after the regatta,” Mr Worthington explained.

To close the proceedings, TSLC CEO Nick Seaver highlighted how efforts to brand the TSLC facility as the most desirable sports center in Southeast Asia will benefit Phuket and help further the island’s brand positioning as a quality sports destination.

“We have a complete sports facility that is able to support all kinds of sports activities. The TSLC has a fitness center, aquatics academy, tennis academy, triathlon academy, rugby academy and football academy.

“We have hosted many important sports events, such as an ITF tennis tournament, the Phuket International Soccer 7s and the IronKids Triathlon. We’ve welcomed athletes to use our venue as a place to train – including the Netherlands’ National Triathlon Team and the Canadian National Synchronized Swimming Team,” said Mr Seaver.

But the TSLC’s efforts are not restricted to targeting professional athletes, he added.

“The TSLC also wants to promote the center not only as a home for athletes and members, but also to tourists as a holistic wellness center,” said M Seaver.

For in-depth coverage of the AMCHAM event see the business section of the June 2 edition of the Phuket Gazette.