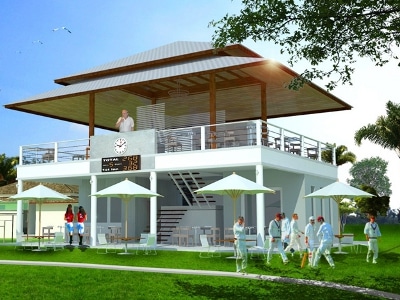 PHUKET: Construction of Phuket’s first dedicated cricket ground, to be called the Alan Cooke Ground (ACG), will start on June 27.

News of the development, announced on the ACG website, adds that the 10-rai site in the lakes area of Baan Lipon, will be called the ACG Cricket and Sports Ground.

The sports facility will be mainly for cricket, but other field sports will be welcome.

Construction of a 250 square-meter, two-storey clubhouse will follow in early July.

Both the ground and clubhouse will be completed in time for the coming cricket season in November, says the website.

The ACG will be the official venue for cricket at the Thai Youth Games to be held in March 2012.

The ground and clubhouse will be maintained by the Phuket Cricket Group (PCG), the official umbrella organization for cricket on the island.

The land owner’s representative, Alan Cooke MBE, has financed the facilities, and has for the past six years been the main sponsor of cricket in Phuket through the Island Furniture leagues.

“The ACG will in a small way do for cricket what the reduction in boat tax did for marine tourism,” said Mr Cooke.

Still reeling after the massive success of the Rugby 10s last weekend, PCG Chairman Pat Cotter is ecstatic with the development.

“This is incredible news for both cricket and sport in Phuket. The island will soon have several world-class sports venues and must be considered one of the top sports destinations in Asia,” he said.

Committee members, players and other people interested in the development of cricket in Phuket will meet to review activities over the past 12 months and discuss plans for the upcoming season.

For information on the new ACG facility visit acgphuket.com.

Anyone interested in cricket on the island is welcome to attend. Refreshments will be available. For information, contact PCG Honorary Secretary Anthony Van Blerk at avanblerk79@gmail.com.

Phuket ‘3G fishermen’ saved by call from the wild