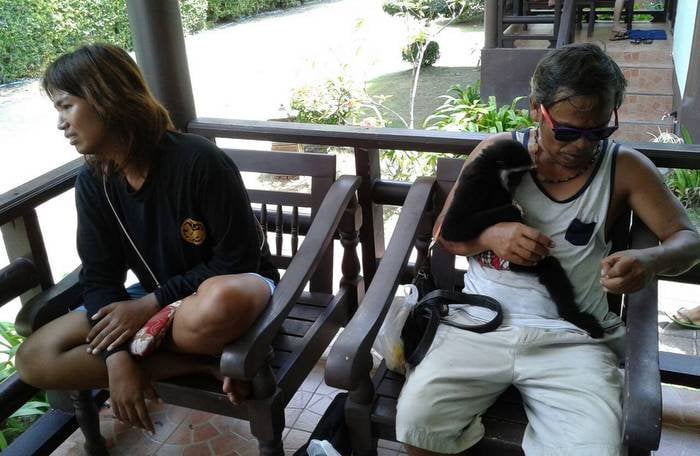 PHUKET: An animal tout who was photographed earlier this month showcasing her dressed up gibbon to tourists on Phi Phi Island (story here) has been arrested.

Nattaporn Sithisak, 22, along with Saman Prabphet, 52, both from Krabi, were arrested in a joint effort raid by officers from the Thung Talay Non Hunting Zone and the Natural Resources and Environment Crime Division of the Royal Thai Police.

The pair were identified from a photograph submitted to the Phuket Gazette by a reader and forwarded to officials.

“The two were caught touting gibbons on Ton Sai Beach,” Suwat Suksiri, chief of the Non Hunting Zone officers, said. “They were charged for illegal possession of protected wild animals.”

According to the Wildlife Reservation and Protection Act of 1992, the fine is not more than 4,000 baht, four years imprisonment, or both.

“It is a very low fine. Moreover, when the case goes to court, it is sometimes reduced to 1,500 baht and a suspended two-year sentence,” Mr Suwat said.

“Because the touts make 5,000 baht a day on average, the small fine does not deter them.”

The two gibbons in the couple’s possession were taken to the Phang Nga Wildlife Nursery Station.

Mr Suwat believes that there are still more than 20 gibbons on Phi Phi Island that need to be rescued.

Gibbons are generally brought over from Phuket. These baby gibbons, costing about 25,000 baht each, are sourced from the wild by poachers who take them from their mother. The mother is killed in the process, Mr Suwat said.

“I’m not sure if it is easy for the touts to hide from the police or if the police tend to ignore the problem. However, for foreigners, touts represent serious animal rights issues,” Mr Suwat said.

Earlier this week, a tout was photographed with a Gibbon on Monkey Beach. Officials vowed to take immediate action (story here).

In March, former Miss Universe Natalie Glebova caused a social media storm after she posted on Instagram a photograph of herself posing with a gibbon in Ton Sai (story here). She later led a public awareness campaign to educate people about the issues of touts’ illegal ownership of protected species (story here).

Thung Talay Non Hunting Zone officials are urging police and other relevant officials to strengthen policies and to enforce stricter penalties for those caught in possession of protected wild animal.