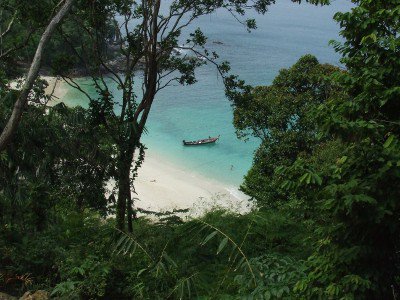 PHUKET: Pheu Thai Party spokesman and party list MP Prompong Nopparit arrived in Phuket yesterday to inspect 65 rai of land near Patong that is under investigation for having been illegally issued land titles.

The land, located behind Freedom Beach on the southern headland south of Patong, was brought to the attention of the National Counter Corruption Commission after it was discovered there was an attempt to sell the 65 rai for about 4 billion baht – an amount equivalent to about US$125.78 million.

The case first came to light in September 2010, when the Director-General of the Royal Forest Department at the time, Somchai Piensathaporn, informed the Public Sector Anti-Corruption Commission (PACC) of irregularities concerning the issue of land title deeds for the Freedom Beach land.

The resulting PACC investigation revealed high-ranking involvement from government departments both in Phuket and Krabi.

PACC Secretary-General Amphol Wongsiri in July 2011 stated that his investigation revealed that 200 million baht had been paid to officials for approval and authorization of the suspect land deeds.

At the time the evidence was being collected for onward transmission to the National Anti-Corruption Commission (NACC) in Bangkok.

The government has now sent their own representative to give new impetus to the investigation and to scrutinize the land title deeds in an attempt to discover how they came to be issued.

Mr Prompong, who visited Freedom Beach and the surrounding forest with the relevant officials yesterday, said, “The complainant, suspecting corruption, questioned the legality of two deeds for a parcel of divided land deemed protected national forest.

“In order to be fair to the complainant, the landowners and the officials implicated, the matter requires to be investigated thoroughly,” he said.

Mr Phrompong pointed out that the issue involves many government departments, including the Natural Resources and Environment Office and the Land Office, as well as several provincial officers.

The investigation will involve questioning past and present provincial officers, forestry officers, natural resources officers and land officers, he added.

“Looking only at the documents and title deeds, everything appears to be in order. However, an inspection of the land itself indicates that there is a conflict with several Phuket Ministry of Natural Resources and Environment regulations,” said Mr Prompong.

He explained that a site survey had proved the land in question is within the boundaries of the Khao Narkkerd Preservation Forest and that SorPorKor documents (which entitle a right to occupy and use the land but not own or sell it) currently value the 65 rai at more than 3bn baht.

“Another issue is that some of the land has a slope of over 35 degrees, designating it as a ‘mountain area’. The current title deeds do not apply to this type of terrain. In any case, title deeds cannot be issued for land within a protected forest. Any government officers complicit in this case are guilty,” he said.

“The evidence was suspicious enough to warrant further investigation as it might involve past and present high-ranking government officials. We will send an official request to Ministry of Natural Resources and Environment officers to have them examine the case, meanwhile the DSI will be asked whether this is a special case or not,” said Mr Prompong.

“In addition, I will send a letter to the Minister of Interior asking them to order the Land Director-General to examine this place. Also Justice Minister Pracha Promnog will be asked to join the land examination,” he added.