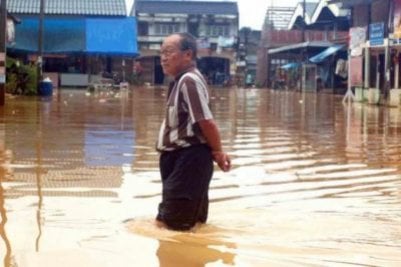 South on alert for floods, landslides; Phuket not affected
Phuket Gazette / The Nation

PHUKET: Weather conditions in the lower Gulf of Thailand will get rough over the next few days, the National Disaster Warning Centre (NDWC) warned this morning.

Phuket, located on the South’s west coast, was not included in the warning and is in fact enjoying good weather, albeit graying skies, as this is posted to the Web this evening.

“All concerned authorities [on the east coast] need to monitor the situation closely,” Wanchai Sakudomchai, director of the Southern Meteorological Centre (East Coast), said, adding that the South was facing the impact of a low pressure ridge moving into Malaysia.

He said the waves in the Gulf of Thailand could be up to four metres high along the South’s east coast.

“Small fishing trawlers should not go out to sea,” he warned.

Floods have already wreaked havoc in the southern provinces this year.

In Narathiwat’s Sungai Kolok district, many locals are preparing to evacuate for the third time this month to escape possible flooding.

The level of the Sungai Kolok River was reportedly rising to dangerous levels this morning.

In Sukhirin district, runoff from the mountains had already damaged some sections of the Sukhirin-Narathiwat road, prompting local officials to put up warning signs alerting motorists to the possible dangers.

Nearly 200 families have moved to higher ground in the same district to stay dry as the downpours trigger flash floods.

In Satun, several consecutive days of heavy rain left the districts of Ma Mang and Khuan Ka Long submerged. And many canals in Khuan Don district are already overflowing, inundating some areas.

Provincial authorities have raised “red flags” and are encouraging residents to evacuate to higher ground.

Songkhla has also been affected, with up to 100 households along the Utapao canal in Hat Yai being inundated for a second time this year.

However, the flash floods that hit several communities on the outskirts of Hat Yai have now receded, while water on Kanchanawanit Road, which connects Hat Yai and Sadao districts, has been decreasing.

The road is well known to many of Phuket’s exaptriate residents who use it for visa runs to the Malaysian border.