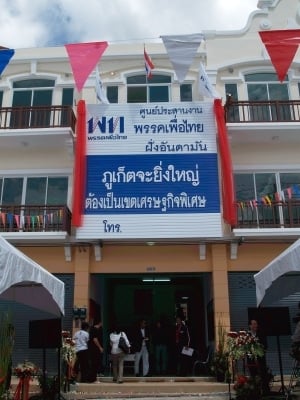 PHUKET: The opposition Pheu Thai Party has launched a bid to win seats in southern provinces in upcoming elections by setting up operations centers in key Andaman Coast provinces, including Phuket.

Party spokesman Prompong Nopparit said at the Phuket center’s opening ceremony on June 24, “We are ready to fight for representation in the next elections. Phuket is the first step.”

The new center, to be managed by Sorrathus Tanyalappitak, is located in a three-story commercial building in Phuket City Home residential estate in Rassada. It will initially oversee the party’s work in four provinces: Phuket, Phang Nga, Krabi and Ranong.

The effort is part of a drive by the red-shirt-allied Pheu Thai Party to gain a foothold in the predominantly ‘yellow’ Southern provinces, most of which are represented in Parliament by Democrat MPs.

Mr Pichet said the party has divided the 14 provinces of the South into three ‘regions’: Andaman Coast, Gulf Coast, and border regions. Each will be developed with different strategies depending on local needs.

In the Andaman region, the Pheu Thai Party aims to push Phuket as a special economic or duty free zone in order to boost the tourism industry. They would also continue the ongoing expansion of Phuket International Airport, a project that dates back to the Thaksin era, he said.

The party would also like to build a railway link from the Gulf of Thailand to the Andaman Coast in order to facilitate easier passage of shipping containers from the South China Sea to the Indian Ocean. The long-dormant and now derelict route, first cleared by the Japanese Army during World War II, runs from the coast in Prachuab Kiri Khan province to Ranong.

Party strategy for the Gulf region, which covers Songkhla, Surat Thani, Nakhon Sri Thammarat and Chumphon as well as the landlocked province of Phatthalung, is to continue agricultural development projects, Mr Pichet said.

The third ‘border’ region comprises Pattani, Yala, Narathiwat, Satun as well as Trang, which does not have a border with Malaysia.

The Pheu Thai Party will follow a proposal by Party President General Chavalit Yongchaiyudh to turn the region into a “special administrative region” in the hope of creating a sustainable resolution to the ongoing insurgency.

Party spokesman Mr Prompong said that although the South of Thailand is rich in natural and human resources, it’s development has proceeded slowly.

The Pheu Thai Party would be better at managing these resources than the current government, he claimed.

The Phuket center will receive suggestions and complaints from citizens about current government polices in their effort to tailor Pheu Thai Party policies for the Andaman region.

Current Democrat Party PM Abhisit Vejjajiva “is not mature enough to govern the country, as he has not kept his word and solved the problems the nation faces,” Mr Prompong said.

The Southern region needs representation from parties other than the Democrat Party to provide checks and balances to the government, he said.

“We now have three or four candidates [for Pheu Thai] in Phuket and we really need someone with good intentions and support from the people; not just a rich person or someone with a famous family name,” he said.

Comparing the party’s strategy to a football match, Mr Prompong said, “Politics is like the World Cup; there is always a chance to hit a goal. I’m quite sure Parliament will be dissolved soon, and we need to be ready.”

The party plans to open Pheu Thai Party centers in every province in the South, he added.