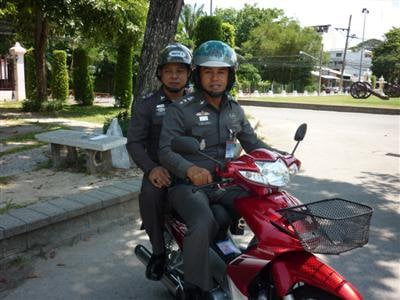 PHUKET: After more than two months of public awareness campaigning, Phuket City Police will tomorrow begin the enforcement of a long-ignored traffic law requiring all motorbike riders – including passengers – to wear crash helmets.

Superintendent Wanchai Ekpornpit said that stepped-up enforcement of the law could save about 30 lives annually in Phuket City Police District, which covers Rassada, Wichit and Koh Kaew as well as Phuket Town.

A random review by police of closed-circuit television (CCTV) footage taken in the district in February and March this year revealed that about 60% of motorbike riders wore crash helmets, compared to just 4% of passengers.

Among riders, helmet use plummeted to just 25.4% after dark, when fewer traffic police are on duty, the survey found.

Another disturbing trend revealed by the CCTV images was the correlation between helmet use and age.

A higher percentage of adults don protective headgear than teenagers, while helmet use among children and infants was described as ‘non existent’.

Statistics released by the injury surveillance unit at Vachira Phuket Hospital for the period covering June 2008 to November 2009 revealed that some 70% of motorbike riders involved in accidents requiring hospital treatment in Phuket weren’t wearing helmets.

Young riders, between the ages of 15 to 30, form the group at highest risk.

Research by the US-based Advocates for Highway and Auto Safety shows that per vehicle miles traveled, motorcyclists are about 21 times more likely die in traffic accidents than people in cars.

For a Gazette editorial on this subject written after the crackdown was announced in late April click here.