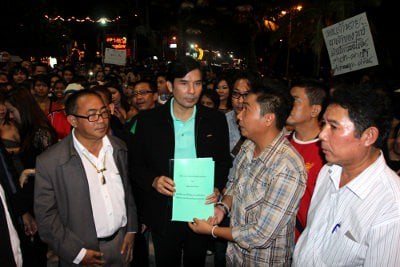 PHUKET: A peaceful protest for later closing times on Patong’s renowned Soi Bangla on Saturday may have finally encouraged the government to consider making Patong a special administrative zone.

Government Spokesman Prompong Nopparit, in Phuket on Saturday, pledged to take up the issue with Pheu Thai ministers at a meeting in Bangkok today.

The outcome of that meeting has yet to be announced.

“I inspected some night entertainment venues in Patong and found out that 99 per cent of tourists there are foreigners,” Mr Prompong told the press.

“But all entertainment venues in Thailand are required to follow the law under the Ministry of Interior. I will raise this issue for discussion at the Pheu Thai Party meeting on Tuesday,” he said.

“For the long term, Patong should apply to be a special administrative area for tourism, just like Pattaya. That will make it easier to manage all the local problems without going through the Ministry of Interior,” Mr Prompong added.

Mr Prompong comments came at a mass gathering of more than 1,500 people working in Patong’s entertainment industry, and other vocations dependent on the tourist town’s nightlife.

The protest was led by Patong Entertainment Business Association (PEBA) President Weerawit Kurasombat, who handed Mr Prompong a formal request for the government to extend the trading hours of entertainment businesses in Patong.

“On January 7, police officers inspected all entertainment venues in Patong and ordered us to close at 2am. That policy directly affects tourism in Patong. It has a domino effect on the business owners, workers, and other type of businesses,” said Mr Weerawit.

He explained that the 2am closing time within Patong’s entertainment zone, and even earlier outside the zone, was costing the local economy tens of millions of baht.

“Patong generates a lot of money from its night entertainment venues, but tourists only start to go out from about 11pm.

“Also, we have only three to four months of the the high season to make enough money to sustain us for a year. If the government doesn’t extend the trading hours, it will hurt our businesses,” said Mr Weerawit.

Patong Police Superintendent Arayapan Pukbuakao yesterday held a meeting with more than 200 entertainment business, including PEBA President Weerawit, to explain that for now all businesses are required to follow the law.

To this Mr Weerawit said, “We understand that the police have to do their job, but if we have to open and close according to the current law, we will suffer from it.

“We are very happy to cooperate, but I would like the government to solve our problem as soon as possible,” he said.

“I will send the officers to inspect venues for weapons and drugs,” said Col Arayapan.

“I would also like to ask all entertainment business owners to install the CCTV cameras inside their night clubs. This helps us in case something happens. It is the best evidence in identifying the criminals if there is a fight or something else wrong that happens,” he said.