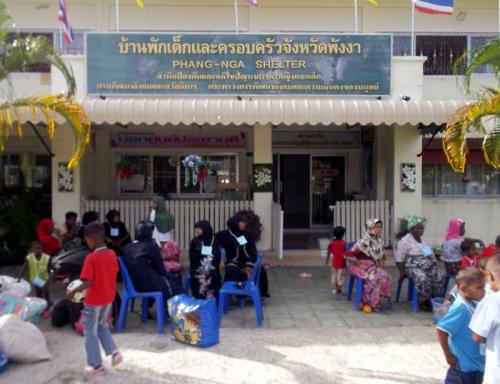 The refugees, a 20-year-old woman and four children aged 5 to 14 years, were taken into custody at 11:30pm. They were among the 18 Rohingya who disappeared from the Phang Nga Shelter for Children and Families near Khao Lak last Sunday.

The woman and children boarded the train in Surat Thani and were apprehended at Chumphon, a high-ranking officer at Phang Nga Immigration told the Phuket Gazette today.

“We coordinated with Ranong Immigration police after we learned that the family was heading to Bangkok by train,” the officer said.

“The five Rohingya got on the train with the hope of getting to Bangkok. We arrested them in Chumphon in order to bring them back to the shelter,” he said.

The senior officer declined to reveal whether of not the five Rohingya were victims of human trafficking.

“Once we finish our investigation, we will reveal all information regarding whether or not they were being trafficked,” he said. “For now let us work our way.”

Human trafficking has become a sensitive issue for Thai officials following a slew of reports by news agencies revealing in detail the extent of some officials’ involvement – and the complicity of others – in thousands of Rohingya refugees being trafficked through the country (story here).