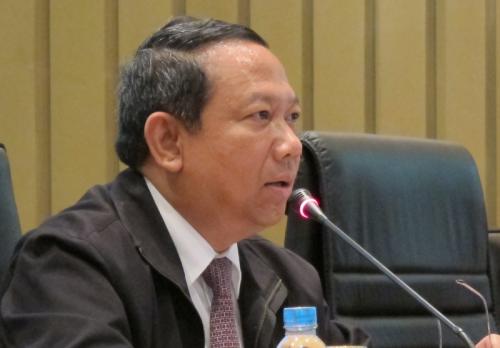 PHUKET: Department of Special Investigation (DSI) chief Tarit Pengdith today leveled a warning at all mafia operating in Phuket: cease and desist within 15 days – or else.

Mr Tarit arrived in Phuket this morning with Tourism and Sports Minister Somsak Pureesrisak and a team of about 10 DSI officials to launch a crackdown specifically targeting illegal taxi drivers and foreigners using Thai nominees in order to illegally maintain control over companies.

The crackdown follows Minister Somsak seeking assistance from the DSI – Thailand’s equivalent to the United States’ Federal Bureau of Investigation (FBI) – in curtailing what he called “mafia gangs” operating in Phuket.

However, at a meeting with about 40 local officials at Provincial Hall today, Mr Tarit openly expanded his warning to all mafia operating on the island.

“We’re setting up an Organized Crime Center for Tourism at Phuket International Airport, which will open within 15 days,” he said.

After August 9, the center will receive any complaints about operators extorting money from tourists – including overcharging for taxi fares – as well as any reports of money laundering and persons being involved in criminal associations.

The center, to be open 24 hours, will be staffed by officers from the Tourism and Sports Ministry, the DSI, local government and police, Mr Tarit said.

“After the Phuket center is open, we will open one in Pattaya. Then we will seek to have a law passed to specifically protect tourists from being cheated,” Mr Tarit said.

“Whoever we find breaking the law will be charged and all relevant properties will be seized while we conduct our investigation,” he warned.

“To all mafia and all officials involved, we’re giving you one last chance to make everything right. After 15 days from now, if you want to keep going, then just try it,” Mr Tarit said.

At the meeting at Provincial Hall today, Minister Somsak said the DSI should be supported by a law specifically designed to protect foreigners from being pressured into a taxi before the fare has been set and to prevent tourists from being taken to souvenir shops without their permission.

After the meeting, the DSI task force headed off to inspect sites in Patong.