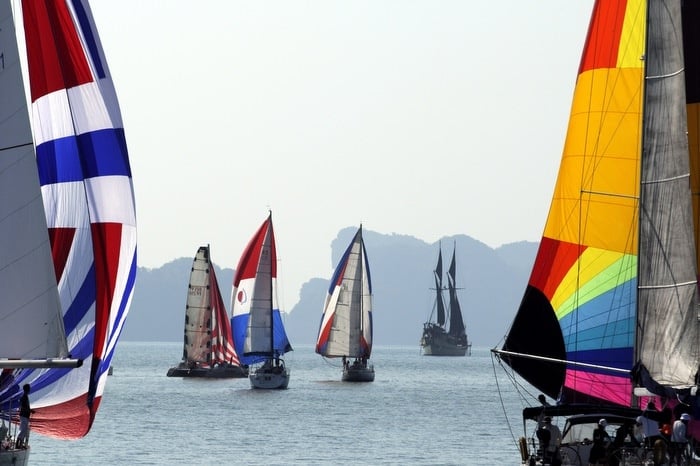 PHUKET: The iconic Phang Nga Bay Regatta returns for its 18th edition this year, with a move to March and calls for cruisers to take sail on the bay.

The annual regatta, informally dubbed “the party regatta” from its reputation in its founding years, has for more than a decade been held, or at least started, in February.

This year, however, the jaunt around the bay will comprise four days of racing from March 4-8, through the spectacular scenery of Phuket, Phang Nga and Krabi.

“We are delighted that we have received such a fantastic response to the change of dates to the first week of March,” said Race Director Simon James of sailing-event organizer Regattas Asia.

“Traditionally, the regatta was based around the Chinese New Year Holiday. However, with the influx of Asian tourists into the area around this 10-day holiday, it has become increasingly difficult for competitors to secure accommodation and charter yachts during this busy period.

“In addition, the change of dates should mean that more charter yachts will be available [to join] as we see this division developing.”

Several venues have re-confirmed for 2015, and James is working on a new mid-regatta stop-over to be announced soon.

This year’s program will begin with registration and the opening party at The Chandara Resort & Spa at Ao Por, on Phuket’s east coast.

The first-night party will be held at The Paradise Koh Yao, then the regatta moves across the bay for the second-night stopover at a venue yet to be announced, followed by a race to Tonsai Bay on Phi Phi Island for the third-night party stopover at the Arayaburi Resort.

The final day sees the traditional race back across the bay to Phuket for the prize-giving ceremony and final-night party at the O2 Beach Club in Chalong.

Online entries opened on January 14, and the Notice of Race, including the conditions and rules for entry, and the handicap scoring system explained, is available online.

Skippers contemplating entering the regatta are urged to decide quickly.

“Due to the limited facilities at our party venues, maximum entries will be set at 50 yachts,” James said.

Discounts are offered for entries registered before Valentine’s Day, February 14.

Phuket, give blood out of love