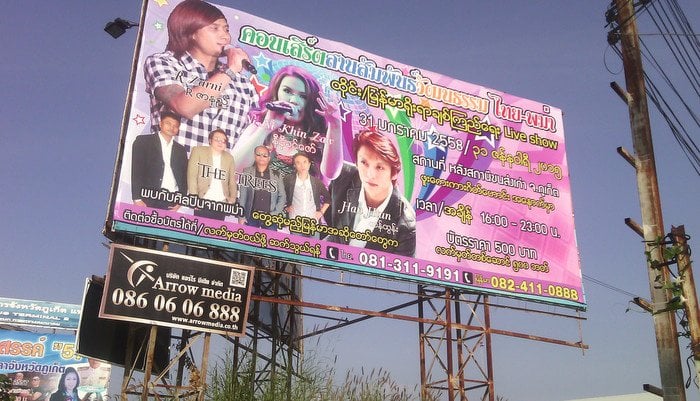 PHUKET: The very first concert in Phuket dedicated to entertaining Myanmar nationals may yet be canceled for security reasons.

Posters and billboards erected around Phuket Town promote the “Myanmar – Thai Cultural Relationship Concert” to be held in a field behind Bus Terminal 1 on Phang Nga Road on January 31.

“The main purpose of the concert is for people to enjoy themselves and to see some of the most popular music artists from Myanmar perform in Phuket for the very first time,” a spokesperson for the event organizer, who asked not to be named, told the Phuket Gazette.

“We would also like to take the opportunity to provide concert-goers with basic information that they should know in order to live in Thailand legally and observe the local culture.”

However, Vice Governor Somkiet Sangkhaosutthirak, who sits as deputy chair of the provincial standing committee for internal security, today confirmed that he was not aware of plans for the concert.

“I had no idea about this concert, and as I am on the internal security committee, I should have been informed before they went ahead with promoting the event,” he said.

“Personally, I do not agree with the idea, especially for security concerns. Can you imagine tens of thousands of migrant workers coming together in the same place, at the same time?”

V/Gov Somkiet conceded that the decision on whether or not to approve the concert was not his alone to make, as Governor Nisit Jansomwong chairs the committee.

The concert planned for January 31 would be a first for the island. Previous attempts to hold it in Phuket have been shot down. A concert in 2007 was canceled for security reasons (story here) while another in 2012 was called off and moved to Phang Nga (story here).