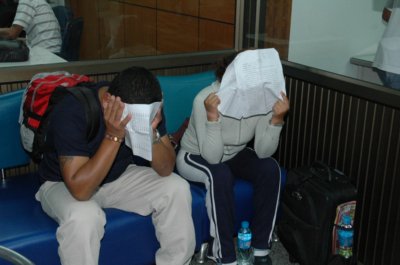 PHUKET: Two Peruvians were arrested at Phuket International Airport on Tuesday while attempting to smuggle 1.6 kilograms of internally concealed cocaine into the country.

Police said that the drugs had a street value of about 4 million baht.

“We received information that two Peruvians arriving on Malaysia Airlines flight MH 786 from Kuala Lumpur would be attempting to smuggle cocaine into Phuket. The suspects were identified as Daniel German Flores Peredes, 32, and Juliette Jiangh Quispe Guerra, 25.

“We arrested them at 9:40 am after checking their passports at the airport Immigration. We carried out a preliminary body search but found nothing. We then took them to the Phuket Airport Customs Office to conduct a more thorough search, but again came up empty handed.

“Both suspects were then taken to Vachira Phuket Hospital, where they underwent abdominal X-rays,” Col Surasak said.

“Doctors noticed some strange objects inside them so we decided to detain them at the hospital until they passed whatever they were holding in their stomach. They were given laxatives to speed up the process.

“On Wednesday morning, both suspects excreted a large number of small plastic cylinders. The cylinders were about three centimeters long with a diameter of about 1.7cm, and were tightly bound with clear sticky tape.

“Peredes passed 103 of the cylinders while Guerra passed 57. The cylinders contained a total of 1.6kg of cocaine, worth about 4 million baht,” he added.

The two detainees then apparently confessed to Maj Sarit Budnongsaeng, an Investigating Officer at Phuket City Police Station, that they had brought the cocaine from Malaysia with the intention of selling it in Phuket.

Maj Sarit told the Gazette that the pair said they had been hired by a man in Argentina to bring the drugs to Phuket, and that they were due to be met at the airport, but they did not know by whom.

“It seems that in this case they were linked to organized crime, but we must wait for the Narcotics Suppression Bureau to investigate their backgrounds further,” Col Surasak said.

The Peruvians have been charged with importing a Class 2 drug (cocaine), and are being held at Phuket City Police Station.

Peredes’ passport showed that he had made one previous trip to Phuket.

On March 21 two other Peruvian nationals were arrested at the airport for trying to smuggle in more than two kilograms of internally concealed cocaine. Click here for full story.